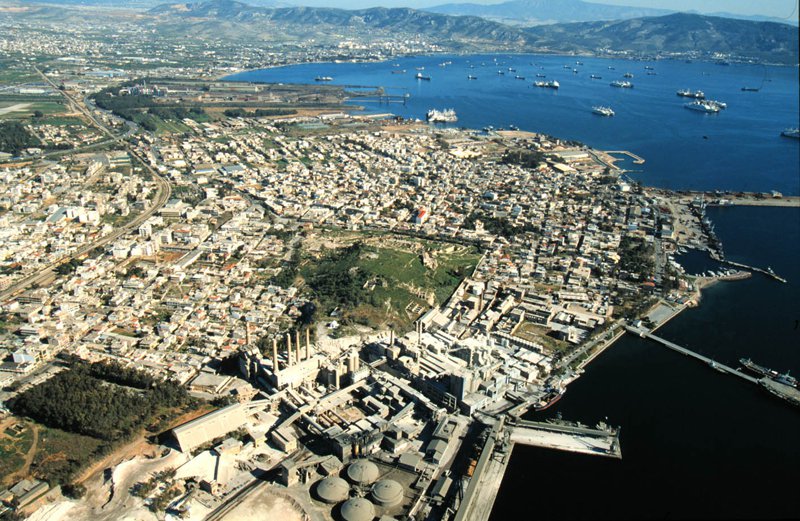 Only 20 km (12 miles) from Athens, Elefsina (Eleusis) is an ancient city which became an industrial hub in the nineteenth century. Over the last several decades, however, it turned into a rather drab, tired post-industrial town.
But now the city has been reborn, and will be honored as the “European Capital of Culture 2021.”
With 30,000 inhabitants, Eleusis is known both as a sacred ancient city and a modern industrial town. Its name may ring a bell with Greek mythology lovers because in ancient times it was one of Greece’s five sacred cities.
The sacred rituals known as the “Eleusinian Mysteries” attracted pilgrims to the city from all over the known world between 1600 BC and 400 AD.
The city, the birthplace of the great tragic poet Aeschylus, hosts the Aeschylia Festival, the longest-lived arts event in the Attica Region. The event began in September 1975; the month was specially chosen to commemorate the time when the Eleusinian Mystery rituals were conducted in ancient times.
The city’s modern industrial development began with the Charilaous Soap factory, which was built in 1875. More development came with the Titan cement industry in 1902. The next period of growth included the establishment of Botrys winery and distillery, built in 1906, and the Kronos distillery, founded in 1922.
In 1922, after the Smyrna disaster, two thousand ethnic Greek refugees from Asia Minor arrived in Elefsina, effectively doubling its population. A military airport was built outside the city in 1936.
After World War II, people from all over Greece moved to Eleusis to work in its factories. However, both the city’s industrial and residential areas were badly planned out amidst the priceless ancient monuments and antiquities which dotted the area.
Eleusis has the largest oil refinery in Greece, and this industry and others created a pollution problem which made the area unattractive for living for some time. 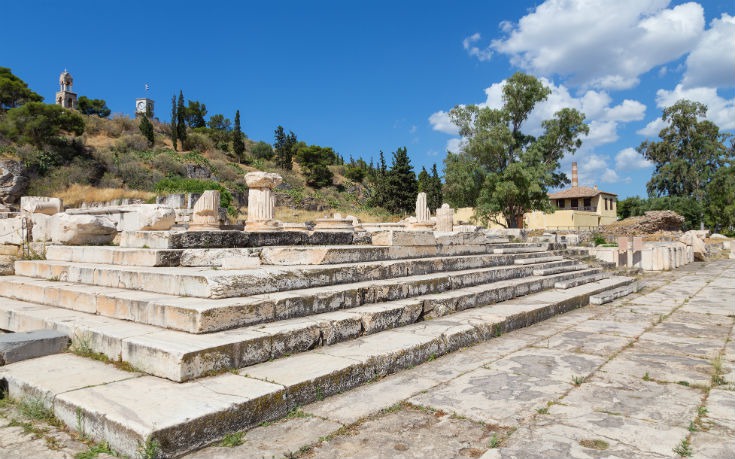 In recent years, Eleusis has worked on rebuilding the now-inactive factories in order to house museums portraying industrial and technological history. The city has received awards for its urban regeneration and its performance in ecology and recycling efforts.
Today, the hill containing spectacular archaeological ruins and the Archaeological Museum take pride of place in the center of the city. The Sacred Way (“Hiera Odos”), the road across the city which connected ancient Eleusis with Athens, is now preserved forever.
The post-Byzantine church of St. Zacharias, at Heroes Square, and the archaeological site of Panagitsa are also preserved.
European Capital of Culture 2021
“Transition to Euphoria” is the city’s theme for the preparations leading up to the big year. The municipality is involving residents and local art and culture associations in several arts programs which will celebrate the cultural designation.
The whole city is alive, with both young and older residents participating in cultural programs in residential areas and along the waterfront. Weekly meetings of young adults and teenagers are held where art and ecological projects are designed and created.
The city of Eleusis now looks like an endless workshop for the arts; exhibits with subjects ranging from artistic photography to the workers’ movement during the industrialization of the area are seen all over town.
“Eleusis is a big (gamble),” Sofia Avgerinou-Kolonia, the president of Eleusis, told reporters from the Athens Macedonian News Agency (AMNA). “We need to overcome shortcomings and move forward.
“The work of the Capital City board is not easy …  we need to synthesize a lot of data and overcome procedural difficulties stemming from the institutional framework and the circumstances that the country has experienced in recent years,” she added.
Avgerinou-Kolonia continued, saying “We believe, however, that we have been making progress recently with the support of the Ministry of Culture, our municipality, our donors, the Ministry of Labor, especially the (unemployment agency) OAED, the Archaeological Service, and residents.” 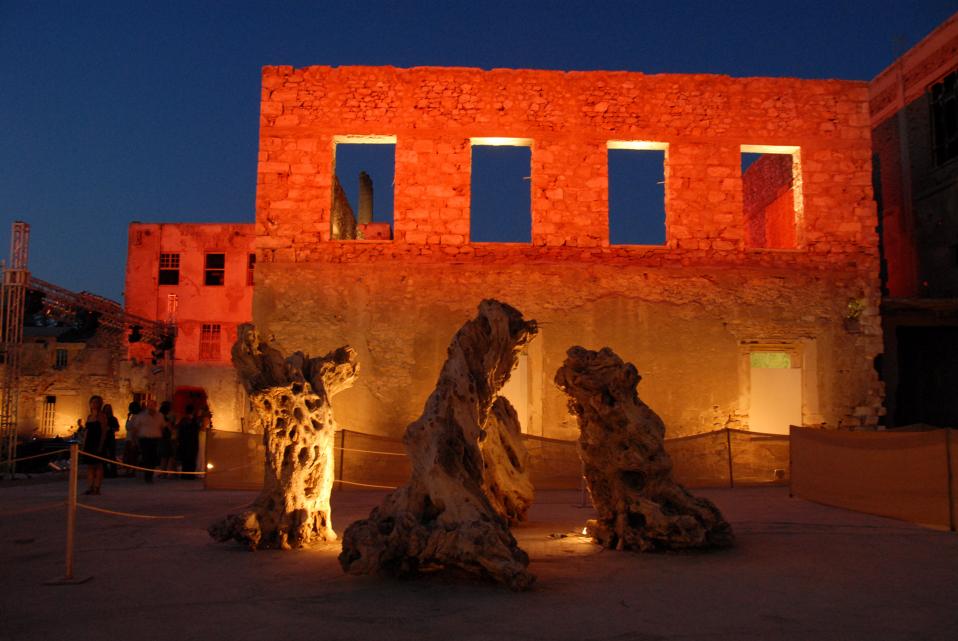 Three major themes are explored as part of the festival, which have been given the names “EUnvironment”, “EUrbanization” and “EU Working Classes”.
The Atelier for Greek Festival Managers, which is taking place in the city of Eleusis from February 15-17, 2019, is currently offering the opportunity to up to twenty Greek festival managers to spend three days together with festival directors, artists and cultural professionals from Greece and abroad.
Issues such as artistic vision, public responsibility, creation and co-production, internationalization, and networking will be explored at the conference. All this is taking place in a city which is a living example of what can be achieved in these areas, even in a city of only 30,000 people.


The Eleusinian Mysteries of Ancient Greece
The Rites of Eleusis, or Eleusinian Mysteries, were the secret rituals of the Mystery School of Eleusis. They were observed regularly from c. 1600 BC to c. 392 AD. It is unknown exactly what the mystic rituals were, but the reason why ancient Greeks participated in them can be understood by the written testimonials of the initiates, which survive.
The Eleusinian Mysteries were so important to the ancient Greeks that The Sacred Way (the road from Athens to Eleusis) was the only road which was not a goat path in all of central Greece.
The mysteries celebrated the story of Demeter and Persephone. All initiates were sworn to secrecy on pain of death as to the details of the ritual. However, it is said that those who participated in the mysteries were forever changed for the better, and that they no longer feared death.
Demeter, who represented the cycle of life and death, was the goddess of agriculture and fertility. Her daughter Persephone was kidnapped by Hades, the lord of the land of the dead. He would return to the land of the living each year, in order that every human being who died would live again on another plane of existence or in another body.
Demeter’s search for her lost daughter appears in several myths, with the main theme of each being the pain and grief of the mother losing her daughter.
The Demeter and Persephone story offered something that no other ancient Greek myth did: a vision of eternal life and triumph over death.
The Eleusinian rituals were enacted twice annually. There were the Lesser Mysteries, which took place in the spring, and the Greater Mysteries, which those who had been purified earlier took part in during the month of September. The initiates walked on the Sacred Way from Athens to Eleusis, calling for Persephone and re-enacting Demeter’s search for her lost daughter.
At Eleusis, the initiates would rest by the well near which Demeter had sat. They would fast, and would then drink a barley and mint beverage called “Kykeon”. It has been suggested that this drink was infused with the psychotropic fungus called ergot, which would heighten the initiate’s experience.
After drinking Kykeon, the participants entered the Telesterion, an underground room where the secret rituals took place. Most likely these were a symbolic re-enactment of the death and rebirth of Persephone which the initiates would watch and, perhaps, take part in.
Whatever happened in the Telesterion, those who entered into it would come out the next morning radically changed. Virtually every important thinker and writer of ancient Greek times was an initiate of the Mysteries.
Plato, an initiate himself (as Socrates was before him) mentions the Mysteries specifically in his famous dialogue on the immortality of the soul, the Phaedo. “Our mysteries had a very real meaning: he that has been purified and initiated shall dwell with the gods.”
In the Myth of Er, the last chapter of Plato’s Republic, a warrior named Er is killed in battle and enters the afterlife but, unlike the others who accompany him, does not drink of the waters of the River Lethe which would cause him to forget his life on earth and move forward into the next.
Er instead comes back to life on the battlefield, and tells his companions about what he saw in the next world and what death is like. He makes it clear that death is not the end of one’s life, but only the beginning of another part of the journey.
Interestingly, Plato never introduces this story as a myth, as a fiction, but treats it as a factual account. The translation of the title of the chapter as the “myth” of Er is unfortunate, as it should actually be understood as the account or “story” of Er. The report of Er is quite probably a reflection of the vision all initiates received during the Eleusinian Mysteries.
Source: Wikipedia