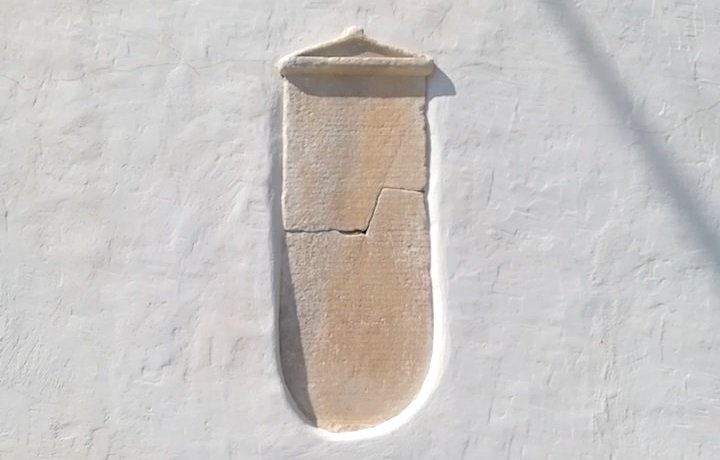 An ancient stone tablet bearing a historic inscription of the Resolution of Nikouria, dating back to the 3rd century BC, has resurfaced on the island of Amorgos after it had gone missing for roughly a century, Greece’s Ministry of Culture announced on Friday.
According to the ministry, the inscription was a key document about the history of the Aegean and was first discovered in 1893 in the Panagia Church on the islet of Nikouria, opposite Aigiali on Amorgos.
The priceless artifact had been temporarily transferred to a nearby stable where it remained until 1908, but then disappeared from view and its fate was entirely unknown.
The announcement said that the text on the inscription, known from the time it was discovered first, concerns “a decision of the League (Koinon) of the Islanders’, a political union set up by the Ptolemys, to participate with official representatives in the feast and games organized by Ptolemy II in Alexandria in the memory of his deified father Ptolemy I the Saviour.
A copy of the resolution was erected on the altar of Ptolemy I on Delos, at the base of the Koinon, while there was also a provision to set up other copies in the cities that had voted in favor, among which were the cities of Amorgos.
The inscription is considered of great importance since it provides evidence concerning the balance of power during the first half of the 3rd century BC and the transition of control from the Macedonians to the Ptolemys.
Dozens of researchers had tried and failed to track down the Nikouria Stone over the years, which was finally rediscovered by an archaeology student from Amorgos, Stelios Perakis, and German archaeologist N. N. Fischer with the help of local residents. The tablet was found embedded in the outer wall of a recently renovated house in the village Tholaria that had previously belonged to a shepherd from Nikouria.
Procedures for the removal of the tablet and its transfer and display in the Amorgos archaeological collection have now been initiated, the Cyclades Antiquities Ephorate said.