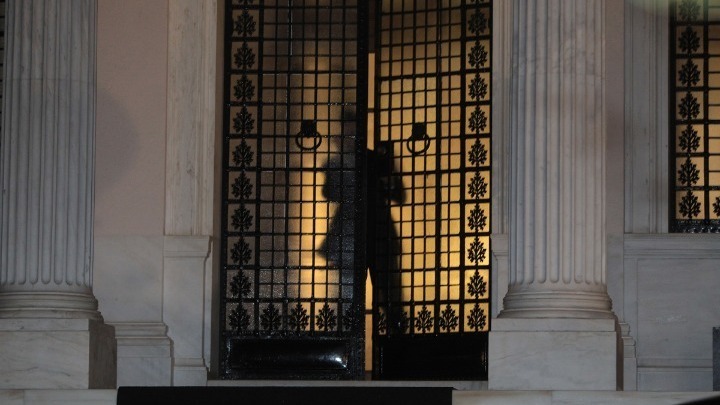 The Greek government is satisfied with the constitutional amendments passed in FYROM’s parliament on Wednesday, according to government sources quoted by the semi-official Athens-Macedonian News Agency (AMNA).
AMNA quotes an unnamed Greek official saying that the proposals “observe the letter and spirit of the Prespa Agreement.”
Paragraph 3 of the fourth amendment mentions that the state “looks after the diaspora of the Macedonian people and the diaspora of other (ethnic) communities, and cultivates and promotes their relations with their homeland.”
The Greek government sources say that “the new wording referring to “diaspora” is equivalent to similar regulations in article 108 of the Greek constitution. Therefore, it observes the letter and spirit of the Prespa Agreement.”
The sources, according to the AMNA report, added that “any unhelpful statements by FYROM’s prime minister, Zoran Zaev, were apparently made for domestic reasons in order to gain adequate support for the agreement, but his commitment to the Prespa Agreement remains.”
In addition, they asserted, the agreement “contains safety valves which, combined with targeted interventions by the Greek side and the international community, leave no room for any misinterpretation.”
The final versions of the four amendments discussed by Zaev in Parliament (which comply with the Prespa Agreement) were already adopted by his cabinet.
The first amendment relates to the change of the country’s name from “The Republic of Macedonia” to “The Republic of North Macedonia”, to be included in every reference in the constitution except in article 36, which is grandfathered.
The second amendment relates to the preamble of the constitution.
The third amendment adds to the constitution a statement that the country respects the national sovereignty, territorial integrity and political independence of neighboring countries.
The fourth amendment includes four paragraphs, as follows:
“1. The State protects, guarantees and cultivates the uniqueness, the historical and the cultural tradition of the Macedonian people.
“2. The State protects the rights and interests of its citizens living or residing abroad.
“3. The State takes care of the diaspora of the Macedonian people and the diaspora of other (ethnic) communities, cultivating and promoting their relations with the fatherland.
“4. Related to this, the State will not intervene in sovereign rights of other countries and in their domestic affairs.”
The amendments abolish Article 49 of the FYROM constitution which said that “the State looks after the position and rights of those who belong to the Macedonian people living in neighboring countries.”
In order to pass, the amendments require a two-thirds majority (80 of 120 deputies). Voting is expected to take place around mid-January 2019.
Kammenos threatens to resign
Greece Defense Minister Panos Kammenos, a staunch opponent of the Prespa accord, said on Thursday that he will resign from the government if the the FYROM parliament approves the changes.
Speaking to military personnel in Larissa, central Greece, the leader of the nationalist Independent Greeks party declared that he is ready to resign from his post and withdraw from the SYRIZA-led government.


(With information from AMNA)