GRNews
GreekReporter.comGreeceGreek PM Tsipras: 'We have Succeeded and have been Justified for...

Greek PM Tsipras: 'We have Succeeded and have been Justified for our Choices' 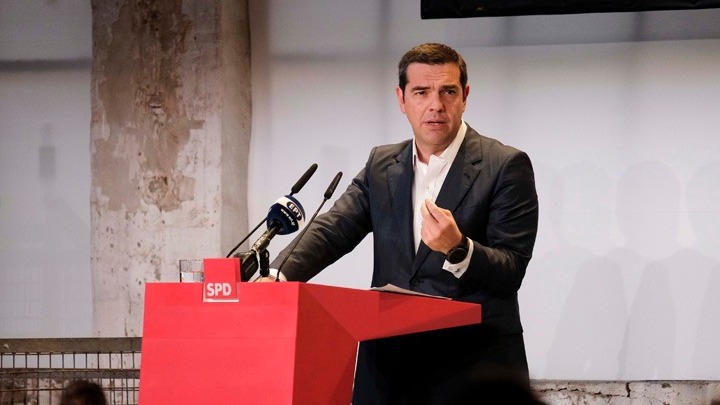 Greek Prime Minister Alexis Tsipras praised his achievements and those of his administration during the years he has been in power in a speech to Germany‘s Social Democratic Party (SPD) in Berlin on Saturday.
“When I faced the biggest dilemma that a prime minister could ever face in July 2015, what helped me make some difficult decisions was when, with a clear mind, I assessed the consequences any political choice would have on the social forces that the Left has to represent and defend, ” Tsipras said speaking at the SPD conference.
“The comparison was terrifying,” the Greek prime minister continued, “because Greece had come to bankruptcy because of the systematic theft of wealth and goods from many for the benefit of an elite who had managed to transfer their wealth to foreign banks.”
“The choice of leaving the euro and returning to the national currency, which for some people sounds like an extremely revolutionary and leftist choice, was, in fact, the choice of the total destruction of the lower classes and the middle class, for the benefit of this elite. A violent redistribution of wealth from the bottom to the top. Harsher than the austerity bailout programs. We, therefore, chose a difficult compromise,” Tsipras continued.
“Today, I feel we have succeeded and have been right about our difficult choices,” the prime minister said.
Tsipras then spoke specifically about his administration’s achievements and how it managed to change national deficits to surpluses, putting state finances in order, while reducing unemployment, giving access to health care to 2.5 million Greeks, rebuilding the welfare state, reforming the social security system, and bringing the operation of schools, universities, and hospitals back to normal.