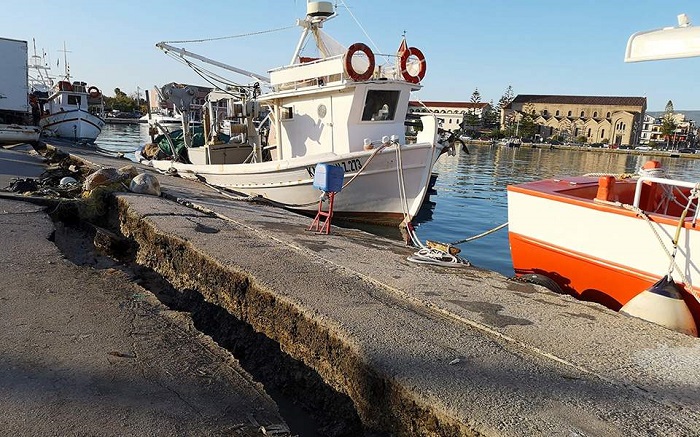 Greek seismologists warn that strong aftershocks are likely to hit near the island of Zakynthos following the main earthquake of 6.4 Richter in the early hours of Friday.
They say that residents and the local authorities must remain vigilant as stronger aftershocks are expected than those between 4.8 to 5.4 Richter already recorded.
The strong earthquake rattled the Greek island of Zakynthos and almost all of western Greece in the Ionian Sea at 1:54 local time on Friday.
Gerasimos Papadopoulos, director of Athens’ University’s Geodynamic Institute, said that the biggest aftershock would reach 6.2 Richter.
“With absolute certainty, we expect the post-seismic activity to continue. We already have recorded dozens of aftershocks. The magnitude of the aftershocks that will follow may grow further and may reach 6 – 6.2 on the Richter scale,” he said.
Seismologist Akis Tselentis said that we should expect a powerful aftershock that could reach 6.1 Richter. “We won’t relax until this happens,” he stressed.
“Residents need to be particularly careful, especially if their homes have suffered some damage.”
However, all experts agree that the major threat to the island has subsided.
The U.S. Geological Survey says that the earthquake measured 6.8 on the Richter scale and had a depth of 16 kilometers. Greece’s main earthquake monitoring center, Athens’ University’s Geodynamic Institute, measured the magnitude at 6.4, and said it had a depth of 5 kilometers.

A 6.9 magnitude earthquake took place in Greece today. The epicenter of the quake was reported to be in the Iyon Sea, 250 km west to Athens.

Measurements of quake strength can vary because of the equipment each institution uses and other factors.
The main harbor for the island of Zakynthos in the Ionian Sea was damaged but still functional, civil protection agency press spokesman Spyros Georgiou said. Power was lost in the island capital and main town, also called Zakynthos, but no major damage was reported there.