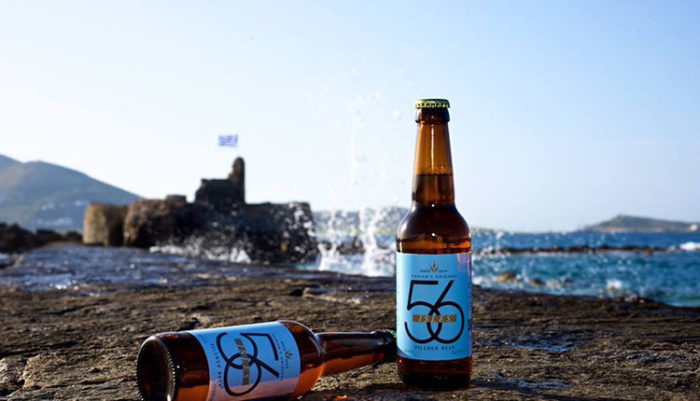 A Belgian-style wheat beer made on the Greek island of Paros, called 56 Isles Aegean Wit has been voted among the world’s top six great tasting beers, winning an unprecedented three stars in the 2018 Great Taste Awards.
Great Taste, organised by the Guild of Fine Food, is the acknowledged benchmark for fine food and drink. It has been described as the ‘Oscars’ of the food world and the ”epicurean equivalent of the Booker prize”.
The same microbrewery that makes 56 Isles Aegean Wit also won two stars for its blonde Pilsner – the first-ever Greek beer to win a star in the Great Taste awards in 2017 – and one star for its 56 Isles session IPA, appearing for the first year.
The Paros Microbrewery was set up on the Aegean island in 2014 by start-uppers Marinos Alexandrou and Nikolas Pavlakis, representing one of the largest light industry investments made in the Cyclades archipelago in recent years.
Starting off with a relatively small production capacity, the microbrewery is now planning a series of new investments to cover the ever-increasing demand in Greece and abroad.
“We believed in the growing momentum of Greek micro-brewing from the start and organized a long-term business plan with knowledge and care,” Alexandrou told AMNA, commenting on the good performance of the company’s product lines, among a total of 12,000 entries submitted for the 2018 Great Taste Awards.
“We set high standards of quality, in line our own taste preferences. We gave our beers ‘heart’ from Paros, which is known from antiquity as the home of the finest barley, and set our sights on the foodies of the world, who know that excellence is not determined by a label but by authenticity and substance,” Pavlakis added.
With information from A.M.N.A.