By Tasos Kokkinidis
September 5, 2018
Facebook
Twitter
WhatsApp
Linkedin
Email
The USA is planning to expand its presence in Greece by increasing its use of military bases and ports in the country, the chairman of the US Joint Chiefs of Staff said on the second day of his official visit to the country on Tuesday.
“If you look at geography, and you look at current operations in Libya, and you look at current operations in Syria, you look at potential other operations in the eastern Mediterranean, the geography of Greece and the opportunities here are pretty significant,” Gen. Joseph Dunford was quoted as saying by the Military Times website.
Dunford was speaking during a visit to the Ministry of Defense in Athens during which he met with the chief of the Hellenic National Defense General Staff (GEETHA), Admiral Evangelos Apostolakis. 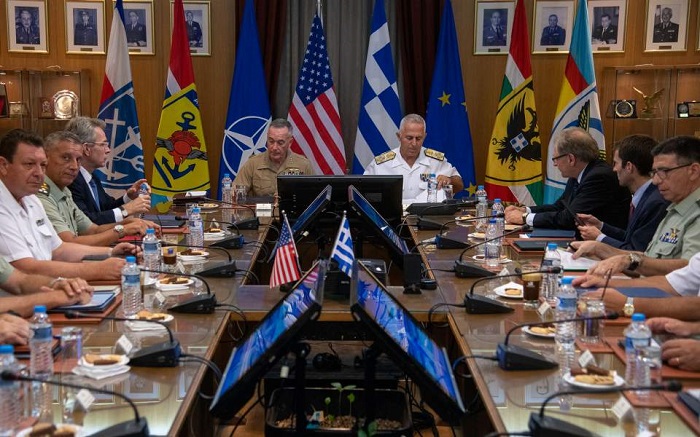 No specific bases have as of yet been identified, according to the report, however, several options are being evaluated by General Curtis Scaparrotti, head of U.S. European Command and NATO’s supreme allied commander.
“Those are discussions that Gen. Scap and others are having right now, as they look around the region in terms of where they want to put forces within the next five to 10 years,” Military Times quoted an unnamed official as saying to reporters.
Discussions of an expansion come amid a surge in U.S. use of Greek ports and military bases. This spring the U.S. began operating unarmed MQ-9 Reaper drones out of Greece’s Larisa Air Force Base.
The transport dock ship New York has made two recent port calls, and the aircraft carrier Truman made a port call in May. The officials said U.S. naval and air presence at Souda Bay “in some respects is at capacity now, in terms of its support for EUCOM, for AFRICOM, for TRANSCOM, even SOCOM now” in part due to increased traffic in support of operations in Syria.
“We have taken advantage of Souda Bay,” Dunford said. “It’s a critical piece of infrastructure here, in the region,” Military Times quoted him as saying.