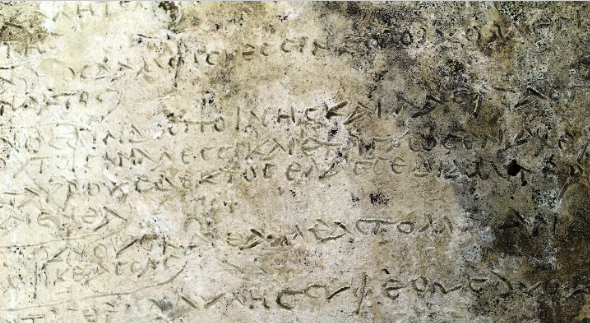 Ancient Olympia has once again highlighted as a monument to world cultural heritage, following the recent discovery of possibly the oldest copy of Homer’s Odyssey.
The mayor of Ancient Olympia, Efthymios Kotzas, spoke to the Athens-Macedonian News Agency (AMNA) on the occasion of the recent discovery of a clay tablet which contains 13 verses of a rhapsody from Homer’s epic.
The clay tablet was discovered after three years of excavations at the archaeological site of Ancient Olympia.
According to a culture ministry announcement, initial estimates date the tablet to the Roman era, possibly before the 3rd century AD.
If the preliminary estimate of its age is confirmed then “the clay tablet would preserve perhaps the oldest extant written excerpt of the Homeric Epics that has been found, which besides it uniqueness is also a very important archaeological, literary and historical record”.
“Despite the fact that Ancient Olympia is a place with great history and great name, the discovery of this important archaeological find gives it even more value and can attract more visitors, supporting the development of the wider region,” Kotzas said.
(Souce: AMNA)