GRNews
GreekReporter.comGreek NewsNetanyahu to Erdogan: Don't Preach to Us About Gaza After What You...

Netanyahu to Erdogan: Don’t Preach to Us About Gaza After What You Did in Cyprus 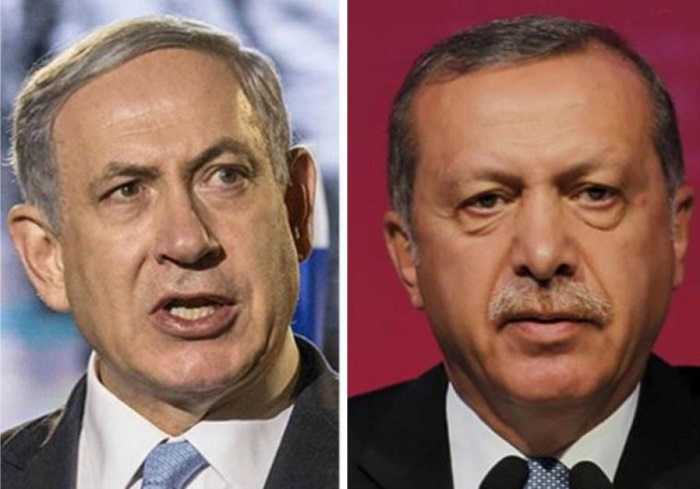 Israeli Prime Minister Benjamin Netanyahu has responded angrily to Turkish leader Recep Tayyip Erdogan’s charge that his hands are “stained with Palestinian blood” following the deadly clashes on the Gaza border this week.

“A man who sends thousands of Turkish soldiers to hold the occupation of northern Cyprus and invades Syria will not preach to us when we defend ourselves from an attempted infiltration by Hamas,” Netanyahu told Erdogan.

“A man whose hands are stained with the blood of countless Kurdish citizens in Turkey and Syria is the last one who can preach to us about combat ethics,” the Israeli leader added.

Erdogan is among Hamas's biggest supporters and there is no doubt that he well understands terrorism and slaughter. I suggest that he not preach morality to us

Earlier, Erdogan wrote on his Twitter account: “Netanyahu is the PM of an apartheid state that has occupied a defenseless people’s lands for 60+ yrs in violation of UN resolutions.”

“He has the blood of Palestinians on his hands and can’t cover up crimes by attacking Turkey,” Erdogan added.

Turkey temporarily expelled the Israeli consul to Istanbul on Tuesday. In response, Israel removed the Turkish consul from Jerusalem.

Tied between the two states have been strained for years, particularly over the 2010 Mavi Marmara incident where Israeli forces killed 10 Turkish activists operating an aid flotilla to Gaza.

Despite renewing diplomatic relations in 2016, good relations have been fragile.