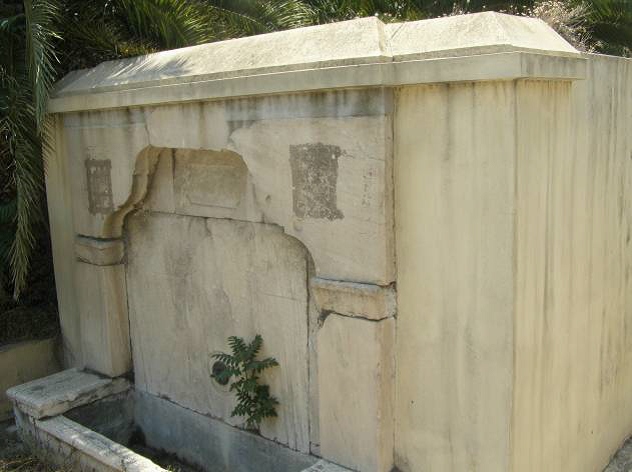 A unique monument in Athens lies hidden in one of the gardens belonging to the capital’s Agricultural University on Iera Odos (Sacred Road), the ancient track that connected Athens to Elefsis.
After almost 400 years of Ottoman rule, the city of Athens had dozens of fountains built by the occupiers with a particular design. The fountains were the only sources of water for city residents at the time.
Through the years, the ornate fountains became favored places for meetings, romantic rendezvous, a cool place to go in the hot summer months, or even popular sights for travelers and inspiration spots for painters.
A famous fountain was the one built by Hadji Ali Haseki in the second half of the 18th century. Today it is inside the Agricultural University, at a depth of one meter below the current level of the street.
The Haseki Fountain has a marble facade surrounded by two pilasters which support double curved arches. The carved ornamental reliefs on the front and the fact that it faces Iera Odos make it a monument for the city.
The main element of its supply system is the closed cistern which sends the water to the basin on the facade.
The water of the fountain came from an aqueduct that gathered the gushing torrent of Glykotrypa near the banks of Kifissos and drove them to the right of the riverbed. After going through several watermills, the water ended up at the Haseki estate.
Around the preserved fountain, there was a fortified wall which protected the Hadji Ali Haseki residence. Today only the foundations of the residence are preserved in one of the newer buildings of the Agricultural University.
Hadji Ali Haseki was the on-and-off ruler of Athens for 20 years (1775-1795). He is famous in the history of Athens for the wall he built around the city, which had remained unchanged for centuries after antiquity.
He was also a tyrannical ruler and came into conflict with prominent Christian Athenians.
His intrigues against Sultan Selim III along with the pressure from the powerful Athenians and the Constantinople Patriarchate had him exiled to Kos and then executed by order of the Ottoman ruler.