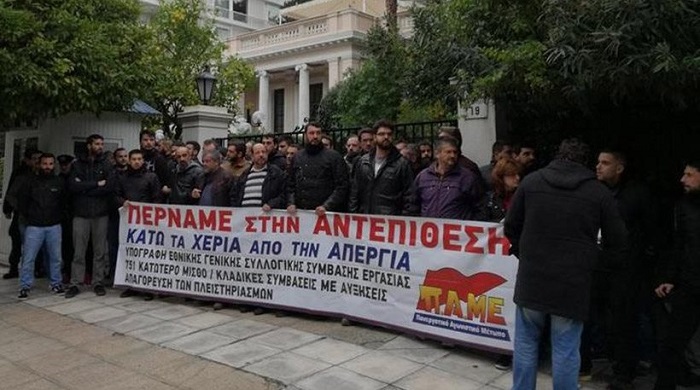 Communist-affiliated labor unionists evaded tight security and demonstrated against employment law reforms just outside the office of the Greek prime minister in Athens on Wednesday.
Associated Press later reported police saying one officer suffered minor injuries trying to stop the protesters disembarking from a bus which drove up to the premier’s residence.
The All-Workers Militant Front (PAME) unfolded a large banner demanding the government withdraw proposed legislation which would require a majority of union members back industrial action for a strike to be legal.
This is a restriction on the right to strike, PAME claims.
Wednesday’s protest, at which there were no arrests, followed angry scenes caught on video on Tuesday when dozens of people taking part in a PAME protest invaded the Labor Ministry.
“The SYRIZA-ANEL government continues the policy of the previous governments and implements all issues they left pending. It promotes fully all demands of large capital and brings new suffocating measures for working people,” PAME said in a statement.
A major PAME rally is expected to be held on Jan. 15.
The legislation made public late on Tuesday, is the last hurdle Greece must clear to receive a new rescue loan installment of about 5.5 billion euros from its European partners.
Greece’s left-led government has stressed the reforms do not include new income cuts and says they are expected to be approved in parliament in the Jan. 15 vote.