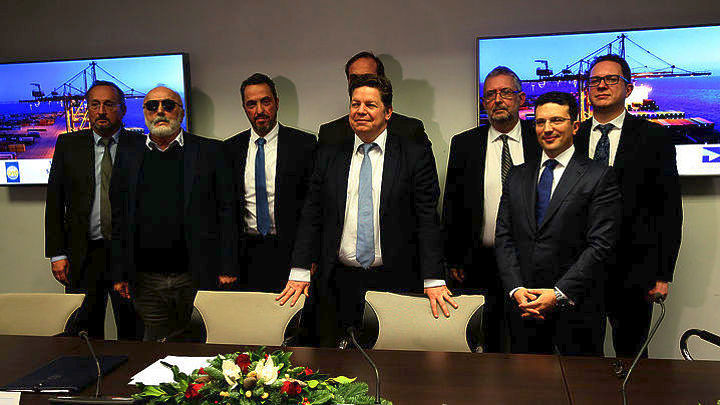 An agreement for the sale of 67 pct of the Thessaloniki port to South Europe Gateway Thessaloniki (SEGT) Limited, was signed at the offices of the Hellenic Republic Asset Development Fund (HRADF) on Thursday, following the approval of the Greek Court of Audit.
The SEGT consortium, consists of the preferred bidder Deutsche Invest Equity Partners GmbH, Belterra Investments Ltd. and Terminal Link SAS, and the sale totaled 231,926,000 euros.
The approval of the agreement by the Competition Commission, is pending. The agreement will need to be ratified in Parliament, and the transaction is expected to be concluded in the first quarter of 2018.
The agreement does not include the sale of port infrastructure, which has been leased to the Thessaloniki Port Authority via a concession until 2051.
The investment, based on existing information, is estimated to reach 1.1 billion euros in total. The agreement requires the investor to pay a price of 231,926,000 euros upon signing the contract and carry out mandatory investments of 180 million euros in the next seven years.
The revenue for the state from the concession contract (3.5 pct of the port authority’s turnover), is expected to exceed 170 million euros.
Also included in the calculations, are forecast dividend payments to HRADF for the remaining 7.22 pct share, and additional investments until the contract’s end in 2051.
The sale agreement was signed by HRADF Board Chairman Aris Xenofos and Sotiris Theofanis, representing the consortium Deutsche Invest Equity Partners GmbH, Belterran Investments Limited and Terminal Link SAS, and Boris Wenzel, CEO of Terminal Link SAS.
Following the signing, Xenofos said that “the development of the Port of Thessaloniki, which follows that of Piraeus, creates a growth axis that traverses vertically all of Greece, and further enhances its role as a European entry gate for multinationals in trade and cruise ship tourism.”
The signing was also attended by French Ambassador to Greece Christophe Chantepy, Dr. Martin Schurig representing the German Embassy, Shipping and Island Policy Minister Panagiotis Kouroublis, and Shipping Deputy Minister Nektarios Santorinios.
Source: ANA-MPA