The capital of Crete, Herakleion, has recently surprised the travel community by being announced as Europe’s fastest growing tourism destination for 2017. According to Euromonitor, Herakleion is now top of the list of European city-break destinations, showing an 11.2% growth in international arrivals, and surpassing even Athens, which followed with a 10% growth.
Herakleion is the main gate to Crete, and until not long ago, a city of secondary importance when compared to other corners of the island. However, thanks to the efforts of the local administration, in collaboration with public institutions and private stakeholders, things have changed steadily and numbers show it.

Herakleion is, in fact, an ideal city-break destination. According to Mr. Gian Andrea Garancini, city deputy-mayor for tourism, the city has long deserved being on top of the list for a number of reasons.
Pleasant weather all year round allows visitors to avoid seasonal crowds in colder months. And there are plenty of things to do even in the winter.
Herakleion, known as the city of the 5+1 civilizations, offers many cultural proposals, entertainment, and activities all year round. Tourism takes different shapes and it includes sports, adventure, and culture.

Archaeological sites such as the Palace of Knossos, or the magnificent Archeological Museum, are just some of the many venues to visit.
The prefecture is also home to unique gastronomic ideas, ranging from Minoan cuisine to fine dining taverns. Other than that, Herakleion also boasts one of the richest wine areas in the country. If we add to the list unique wineries and cocktail bars, what we get is the perfect foodie destination. 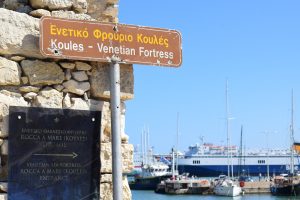 International cooperation with different countries is also part of the agenda. Herakleion is about to twin with the Russian city of Nizhny Novgorod; which is the 5th largest city in Russia. The capital of Crete has also been designed as a guest city for Shanghai World High Tech Exhibition, 2018. And finally, the historical ties the city has always had with Venice, are being strengthened further.
Mr. Garancini, who has been actively engaged in activities designed to increase the touristic season, and to promote the cultural heritage, can’t hold back his satisfaction. “Being in first place among European destinations is something really important, it doesn’t happen every day, and it doesn’t happen ‘just because’, either. We’ve worked hard for it during the years, and the results are here to stay”.