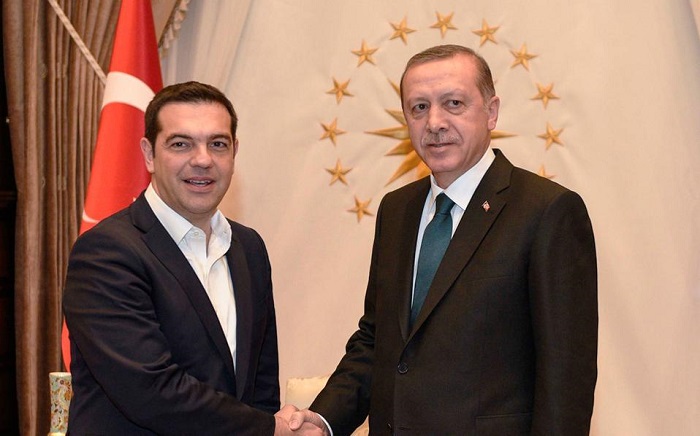 Turkish President Tayyip Erdogan will make a historic visit to Greece on Thursday, a sign that relations between the two countries are improving, despite a series of long-term, unresolved bilateral issues.
With Turkey’s European Union relations quite strained at the moment, Erdogan’s visit on Dec. 7-8 will be important for Athens, as well as for Ankara. It will help ensure that communication continues over the migrant crisis and other bilateral issues.
“Issues that concern the two countries will be on the agenda of talks – tensions in the Aegean Sea, the refugee crisis, economic relations with a focus on energy, trade and transport,” government spokesman Dimitris Tzanakopoulos said.
“What we anticipate is a substantive upgrade of our relationship with Turkey. We expect very constructive talks.”
In Turkey, a government official said: “This will be a visit from which we expect solution to problems. I think Erdogan and (Greek Prime Minister Alexis) Tsipras will show a common will for the solution of some of the problems.”
The fallout of a failed coup attempt against Erdogan in 2016 has tested bilateral relations; while the coup unfolded, eight Turkish commandos flew into Greece to evade capture.
The Turkish government regards them as coup plotters and wants Athens to hand them over. Greek courts have blocked their extradition. The senior Turkish official said terror groups were crossing into Greece from Turkey.
“The prevention of this is critical for Turkey,” the official said. “Erdogan will ask for the extradition of these people, starting with the ones that fled there with a helicopter following the coup attempt.”
At odds over everything from uninhabited islets, airspace and the boundaries of Greece’s continental shelf to the ethnically divided island of Cyprus, differences between the two countries have outlived the Cold War.
Nevertheless, Erdogan’s visit is expected to boost bilateral trade relations, according to the head of Turkey-Greece Business Council. “Turkish investments [in Greece] would increase with the reduction or removal of [bureaucratic] obstacles,” Tevfik Bilgen told Anadolu Agency.

Bilgen said the two countries’ businesspeople should come together more often, so that they could find more business opportunities.