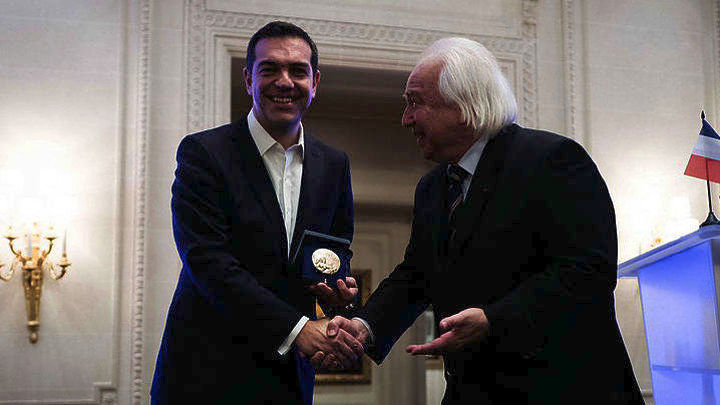 Greek Prime Minister Alexis Tsipras who is visiting France for talks with investors and the French president Emmanuel Macron received an award for political courage.
The “Prix du Courage politique” (Political Courage Prize) was presented to Tsipras by the founder of the magazine “Politique Internationale” Patrick Wasjman.
At the ceremony in Paris Tsipras said that the award belongs to the Greek people.
“The award that I receive today belongs to the Greek people and I accept it on their behalf.”
“Our courage is the courage of the Greek people,” added Tsipras, underlining that “From them (Greek people) and their historical experience and maturity we draw courage and strength to stand on our feet in the twilight of the great ordeal of the last seven years”.
Wajsman said that the main reason for the jury’s decision to honor the Greek prime minister this year was the fact that “despite the different orientation that Tsipras’ political family originally had, he found the courage to keep Greece in the euro and Europe, avoiding consequences that would have been disastrous for everyone.”
“He had the courage to make decisions in favour of Greece and Europe, he is a man of convictions and bravery,” he told ANA.
“Real leaders are people who are capable of understanding the meaning of history and putting their personal inclinations in second place when needed, as did Alexis Tsipras,” he added.
As part of his visit, Tsipras will also meet with French businesspeople who are interested in investing in Greece.
Tsipras is scheduled to meet French President Emmanuel Macron for a working breakfast on Friday morning.