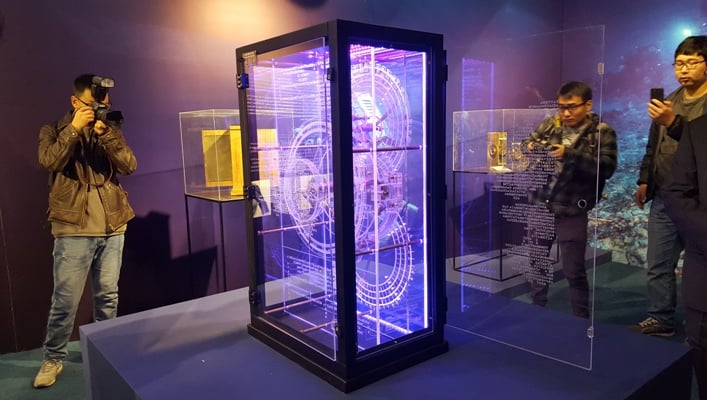 The “EUREKA! Ancient Greek Science, Art and Technology Exhibition” hosted by the China Science and Technology Museum (CSTM) in Beijing, is a one-stop destination for many young aspiring scientists who wish to discover and study a wide range of ancient Greek scientific and technological expertise.

From portable analogue computers that can accurately calculate the position of the sun, moon and planets, robots that can walk and pour drinks, to automatic theatre and slot machines, the CSTM has attracted the attention of those who are interested in a series of ancient Greek-based innovative creations, which are the basis of our everyday modern technology.

The exhibition which was initially opened to the public on November 3rd 2017, is jointly organized by the CSTM and the Museum Herakleidon in Athens, Greece, and gives visitors the opportunity to explore all of the 53 models and demonstrations that are on display and embody the spirit of the glorious Greek innovation and wisdom.

The exhibition showcases a broad scientific spectrum; from building and public works, measurements of space and time, mechanical engineering, automaton, astronomy, shipbuilding to technology in arts and sports, military technology and telecommunications.

Founder of Museum Herakleidon, Mr. Pavlos Firos, told People’s Daily that “this is the first time so many objects in various themes are on display.”

“China and Greece may be far apart, but both civilisations encourage innovations and foster new ideas,” he added.

Mr. Firos confessed that he is looking forward to further cooperation with the CSTM to promote mutual understanding of achievements and enhance friendship between the two great nations.

“Strengthening people-to-people contacts was in line with vibrant diplomatic and economic ties between the two countries which would help understand each other better” she explained.

The exhibition will be open until the 7th of March 2018, and People’s Daily reported that it is a chance for everyone to see and understand that “what the world thinks today, the Greeks thought thousands of years ago”.