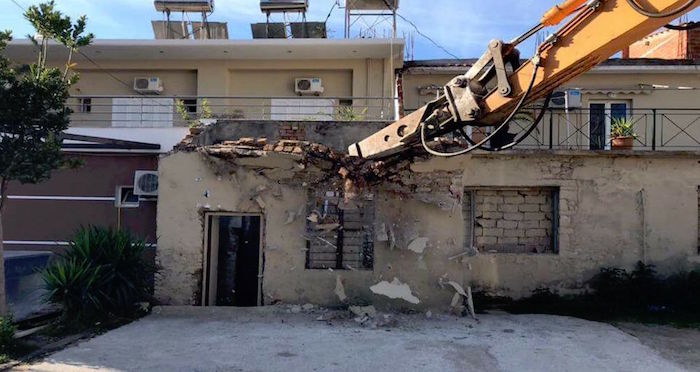 The Greek government has reacted very calmly to the expropriation of homes and businesses of the Greek minority in Himara, after the Albanian authorities decided to turn the town into a holiday destination.
The Himara Greeks who have seen their homes or businesses in the demolition plans, complain that the Albanian government is “kicking out” the area’s strong Greek population and the tourism development project local authorities claim is only a pretext.
The development plan includes 70 real estate properties that belong to Greeks, A Proto Thema news website says. The Greek families have received eviction notices because their homes will be demolished as they belong to the development project.
Local Greeks have complained to Greece’s Embassy in Tirana, and the foreign ministry. Nevertheless some houses and businesses have been demolished so far, with owners watching but unable to stop the bulldozers as police were guarding the wrecking crews.
However, the reaction of the Greek government to a series of acts that clearly violate the rights of Greeks in Albania was too soft. The foreign ministry issued a statement condemning the provocative act of the Tirana government. Yet, no further steps were taken to complain to international organizations.
Government spokesperson Dimitris Tzanakopoulos stated that, “Athens is watching closely what is happening (in Himara) and is taking all necessary measures”. (Translation: the government is doing absolutely nothing about the issue because the Greeks of Albania do not vote in Greece.)
All opposition parties condemned the illegal and offensive act by the Edi Rama government, clearly a provocation, another one of several in recent years. Yet, neither on of the ruling coalition parties (SYRIZA-ANEL) released a statement expressing disapproval.
Adding last week’s visit of Turkey’s Vice President Hakan Cavusoglu in Western Thrace that turned into blatant propaganda against Greece – calling the Muslim minorities “suppressed Turks” – it seems that the Greek government is too soft in its reaction, if not downright indifferent, to its two neighbors on the East and West that openly make territorial claims on land that belongs to Greece.
Greece’s passive stance to the continuous provocations by its neighbors has not worked out so far. Instead, Albania and Turkey seem to act more aggressively the more the Greek government backs down.