By Babis Petrakis
October 28, 2017
Facebook
Twitter
WhatsApp
Linkedin
Email
Two treasures from Shanghai Museum were put on display on Friday at the Athens Acropolis Museum for an exhibition which will be on display until April 30, 2018.
From Saturday October 28, Greece’s National Day, to springtime, Greeks and foreign visitors will have the opportunity to admire two outstanding items which travelled to Greece in the context of a memorandum of cooperation signed between the two museums and the 2017 Greece-China Year of Cultural Exchanges and Cooperation in Creative Industries. 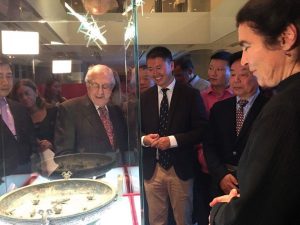 During an opening event on Friday the two masterpieces were presented by officials from the Acropolis museum and Shanghai Museum.
A hand scroll painting with ink and color on paper created by artist Wu Hong in the 17th century (Qing Dynasty) greets visitors at the entrance of the Acropolis Museum at the foot of the sacred hill of the Athens Acropolis.
Next to the composition which is entitled “Traveling along the Clear Water” is put on display the Zi Zhong Jiang Pan inside of which there are figures of aquatic birds, frogs, turtles and fish.
It dates back to the 7th century B.C. (Early Spring and Autumn Period), it was made for Princess Zi Zhong Jiang and it is considered one of the most important exhibits of the Shanghai Museum. 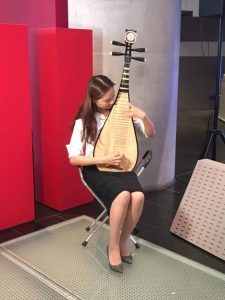 “This is the opening towards a very significant, a great civilization. Given the fact that there is great interest from the Chinese side into our civilization and art we decided to launch this cooperation with the museum of Shanghai,” President of the Acropolis museum Professor Dimitris Pantermalis explained while addressing the event.
In the framework of the cooperation between the two museums two exquisite objects from the Acropolis Museum will be exhibited at the Chinese museum from January 11 to April 8, 2018.


The two antiquities loaned are a marble statue of a Kore (520-510 BC), one of the most beautiful and well-preserved sculptures of the Acropolis, which retains traces of its archaic colours, and a red-figure lekanida lid with a Dionysian scene (350-325 BC).
The exchange of the exhibits between the two museums is the first of many steps outlined in their cultural exchange agreement.
Source: Xinhua News