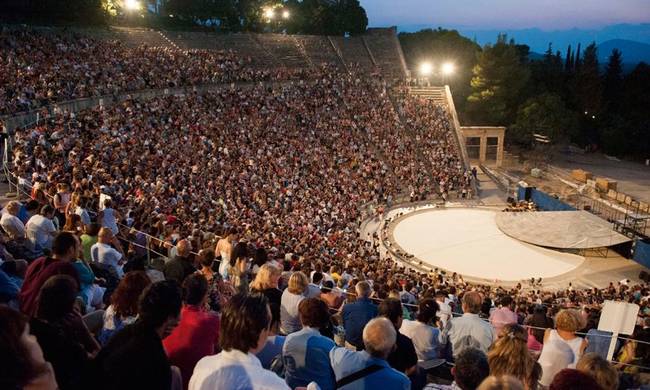 The Hellenic Institute of Acoustics (ELINA) objects to a Guardian article about the “abolition of the myth of good acoustics in the ancient theater of Epidaurus“.
According to a report on The Guardian, the acoustics in the ancient theater are not as great as legend has it. Based on research conducted by Constant Hak; assistant professor at the Eindhoven University of Technology, and his team, the acoustics of the theater are a Greek myth.
However, ELINA suggests that the article lacks scientific evidence and is based on arbitrary conclusions aimed primarily at impressing people.
“In the past, a number of scientific publications in valid international scientific conferences, journals and a relevant international conference organized by ELINA in 2011 on the acoustics of ancient theaters, have presented results that highlight the legally well-known “good acoustics”of the theater”, said Associate Professor at Ionian University and member of the Board of Directors of the Hellenic Institute of Acoustics, Andreas Floros.
Floros says that the article is based on conclusions drawn from a presentation by a group of Dutch scientists at a recent conference using methods that are not scientific.
However, the ELINA representative continues saying that the Epidaurus theater, from ancient times until today, shows that its acoustics are suitable for providing theatrical speech to a large audience, often in excess of 10,000 people.
ELINA, with a text distributed to theater operators and tour guides, points out that “good acoustics” means the ability to reproduce intelligible speech even at distant listening positions, distances of nearly 60 meters from the orchestra of the theater. This notable achievement in the design of the theater has been largely recorded and praised throughout the ages.