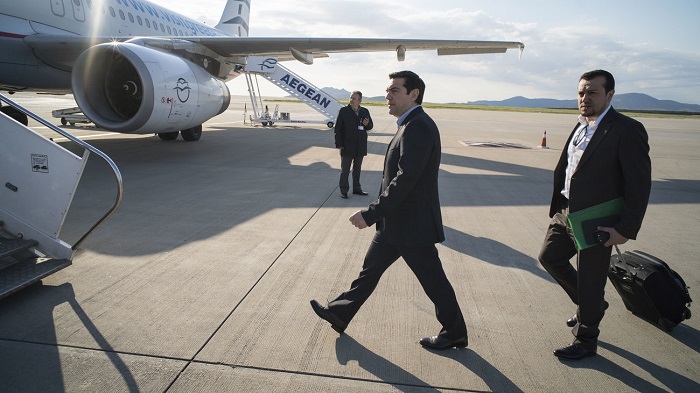 American investments, security issues, regional cooperation and the Greek-American community are high on the Greek PM’s list for his visit to the USA, where he is to meet with President Trump on Tuesday.
Alexis Tsipras is to also meet with senior US officials, investors, entrepreneurs and members of the Greek Diaspora.
According to Greek officials, Tsipras is to arrive late Friday in Chicago. Throughout the weekend he plans to meet representatives of the Greek-American community, as well as to have the opportunity to talk to representatives of the business community based in Chicago.
On Sunday afternoon he is to become the first Greek premier to visit the National Hellenic Museum, where a reception in his honor is planned.
Tsipras is also going to meet with investor John P. Calamos, Sr., who is Chairman of the Board of Trustees of the National Hellenic Museum, as well.
On Monday, he is going to meet the city and state authorities: Chicago Mayor Rahm Emanuel and Illinois Governor Bruce Rauner.
Monday morning he is to address the Chicago Council on Global Affairs. The theme of his speech is to be ‘Greece as a strategic partner for the US in Southeastern Europe and the Eastern Mediterranean’.
On Monday afternoon Tsipras is going travel to Washington, where he is to meet with the Director General of the IMF Christine Lagarde, at the Fund’s headquarters.
On Tuesday October 17, the Greek PM is to pay a visit to the White House where he is going meet President Trump.
On Wednesday he is due to meet Vice President Mike Pence, and deliver a speech at the Brookings Institute before departing for Brussels for an EU Summit.
According to Greek government sources, the topics of the talks in the US are:
– The economy, with emphasis on strengthening Greece’s efforts to exit the crisis and its stable access to markets.
– Security, given the critical role Greece plays in the wider region.
– Regional developments given that Greece has an active involvement and upgraded cooperation with a number of neighboring countries.
– Energy, given the international interest in this issue and the country’s position as a hub for gas supplies from the east towards Western Europe.
– Strengthening links between Greece and the Greek-American community which could play an important role in helping the country’s recovery through investments.