By Tasos Kokkinidis
October 9, 2017
Facebook
Twitter
WhatsApp
Linkedin
Email
Over 2,200 people are staying in and around the Samos migrant camp even though the designed capacity is for 700 people, the humanitarian organization Samos Volunteers (SV) says.
The volunteers describe a situation of chaotic overcrowding as migrants are forced to sleep in the woodland areas around the camp.
The level of overcrowding is causing a severe deterioration in the health and well being of people who have limited access to shelter, basic sanitation and medical facilities. Not enough shelter is provided for the constant influx of people arriving by boat from Turkey. People are forced to sleep in pop-up tents and make-shift shelters, at least a hundred of which are set up in the woodland areas around the camp, SV says. 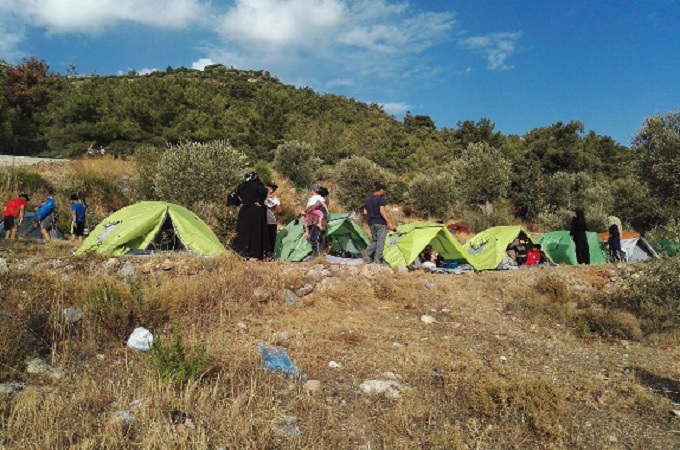 Immediate action is needed
Bogdan Andrei; coordinator of (SV), calls for immediate action to ease living conditions.
“This is the worst camp situation I have encountered on Samos in the past two years. The approaching rain season, with literally no concrete plan of action by the authorities, makes the circumstances even more difficult. When the rain starts, hundreds of people will be flooded out of their tents and left without a place to sleep, facing severe security risks as a result. Large-scale riots can happen at any time.”
Decreasing presence of NGOs on Samos
In the past, close collaboration between NGOs has proved essential to compensate for areas which the camp authorities have failed to address. However, the number of NGOs active on Samos is shrinking, which diminishes the effectiveness and access to essential services needed for the refugees.
At the same time, severe shortcomings in coordination and cooperation from the authorities hinders our ability to supply provisions to people in need while work towards decongesting the camp grinds to a halt.