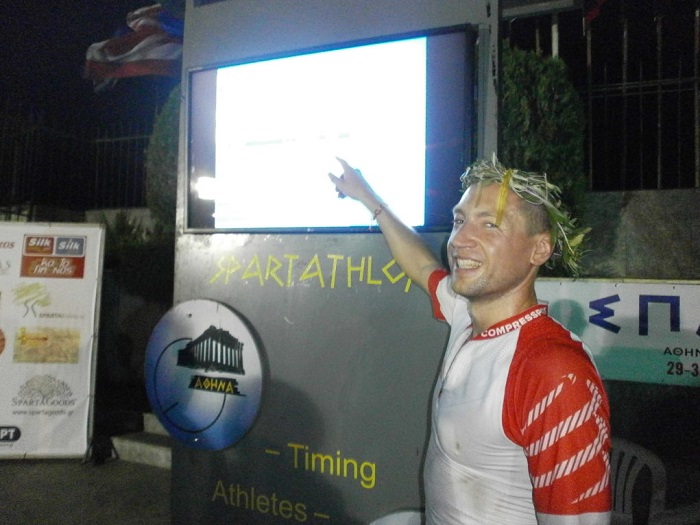 Lithuanian runner Aleksandr Sorokin won the 35th edition of Spartathlon, one of the most challenging and historical ultra-marathon races, in Sparta on Saturday.
Sorokin, 36, touched the feet of the statue of ancient Spartan King Leonidas in the center of Sparta before dawn around 5:00am local time, covering non stop 246 kilometers from Athens in 22 hours, 4 minutes and 5 seconds.
It was the fifth best time in the history of the event, according to the International Association “SPARTATHLON” which organizes the event each year.
Sorokin, a casino employee who took up running 5 years ago to lose weight, shouted “Sparta” as he reached the finish line. The victory in his first participation in Spartathlon was the best gift for his birthday on Saturday, he told Xinhua.
“It is a great event. I dedicate the victory to my wife. I am so happy,” he said.


Czech runner Radek Brunner finished second in 22:49:38, Greek Nikos Sideridis came third in 22:58:41 and Japanese Ishikawa Yoshihiko fourth in 23:20:57.
“Whoever finishes this race is a winner,” Sideridis, a Coast Guard officer, said. It was his third participation in the race. The first time he had not managed to reach the statue of King Leonidas.
The 35th Spartathlon from Athens to Sparta kicked off at the foot of the Acropolis hill on Friday morning at 7:00am local time.
This year 400 runners from 52 countries and regions competed, following the footsteps of ancient Greek soldier Pheidippides from the Greek capital to the southern Peloponnese peninsula city of Sparta.
In 490 BC, ahead of the battle of Marathon against the Persian forces, according to historians, the Athenian messenger who inspired the Classic Marathon was sent to Sparta to request support, making the journey on foot non stop within two days.
Greek veteran runner Yannis Kouros, who won the first Spartathlon, still holds the record time at 20:25:00.
(Source: Xinhua)