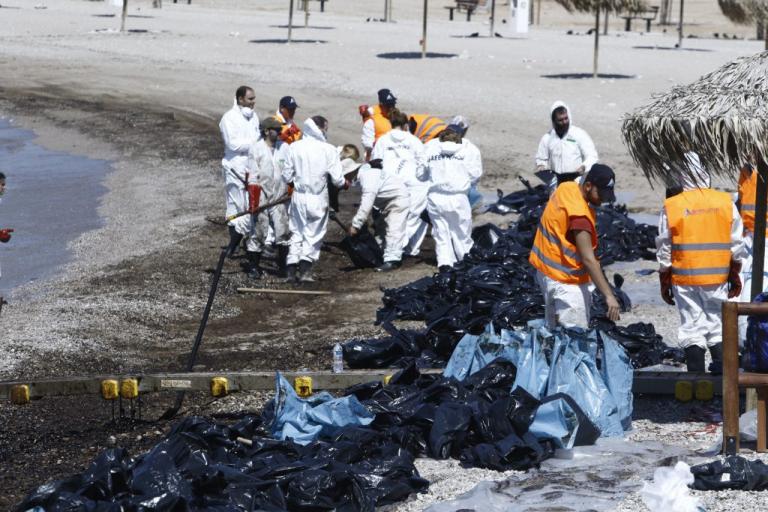 After a three-day delay, pumping oil from the hold of sunken oil tanker Agia Zoni II that polluted the Athens coastline restarted on Saturday morning.
The process began at 09:20 on Saturday, after a three-day pause. Tanker Syros that took over the pumping procedure had pulled 50 cubic meters of oil by early evening.
The decision to assign the work to Syros was taken by Minister of Shipping Panagiotis Kouroumblis on Friday evening. On Friday morning, the assignment was to be given to Aegean Breeze I that belongs to another shipowner.
The three-day delay and the change of pumping ships was criticized by the opposition. Overall, there is general dissatisfaction by political parties and citizens alike over the handling of the ecological disaster by the government. Opposition parties accuse the Syriza-ANEL administration for failing to respond adequately to the seriousness of the situation.
In a poll conducted by Metron Analysis, seven out of ten citizens say they are disappointed by the way the government handled the oil spill incident. Even six out of ten Syriza voters are not happy with the way the administration reacted to an environmental disaster of such scale. Also, six out of ten participants in the survey demand that the pertinent ministers should resign from their posts.
Meanwhile, anti-pollution and patrol boats of the Hellenic Coast Guard, other agencies and private companies continue to carry out clean-up work.
At the moment, six anti-pollution craft, two coast guard patrol boats, six private clean-up ships, the AKTEA anti-pollution ship of the European Maritime Safety Agency (EMSA), boats of the Agia Zoni II owning company and several volunteer boats are involved in cleaning up the waters in the Saronic Gulf.
Floating dams have been put in many parts of the coastline in an effort to stop the oil slick reaching the beaches. Across the outh Attica coasts, authorities and volunteers continue to clean the beaches from washed-out oil.