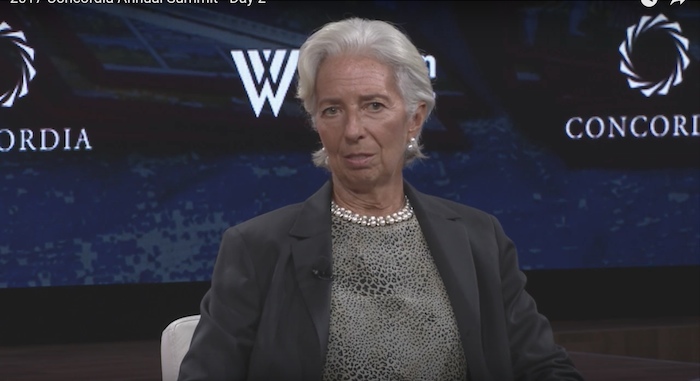 Christine Lagarde may soon be visiting Athens in order to discuss the future position of the IMF in Greece’s bailout program, with the Greek government.
According to John Koudounis, CEO of Calamos Investments, who spoke to Lagarde on the sidelines of the 2017 Concordia Summit, the IMF chief will announce her moves in the next couple of days.
Greece came up as a topic of discussion between policy-makers, academics, business people and journalists that assembled for the conference that took place at the same time as the UN General Assembly, in New York.
Speaking exclusively to the Greek Reporter, Koudounis said that the current thinking is that Greece is not necessarily out of the crisis yet, but “we are making progress”.

Here’s an excerpt of the upcoming exclusive interview:


“The austerity measures need to be lifted, we need some relief…If the PM [Alexis Tsipras] keeps pushing, he may get some relief from the EU and the IMF.”
Koudounis; a prominent Greek-American businessman, has used his knowledge and contacts to assist Greek governments of past and present in their dealings with Washington. He has close contact with key people in the Trump administration, and on friendly terms with the President’s family.
Koudounis was also instrumental in having Calamos Investments taking part in Exin Group who recently made the largest investment in Greece by acquiring Ethniki Asfalistiki.
“I don’t think the Greek crisis is completely over, but I think the worse is behind us. I don’t think it will be a “hockey stick” improvement, but I think we are on the right course“, Koudounis said to Greek Reporter.
There was also speculation in New York that a meeting between President Trump and Alexis Tsipras is in the cards, perhaps sometime in October. The thorny issue of debt relief for Greece will dominate the conversation, when the two leaders meet.
Greece is currently locked in talks with its creditors to conclude the third review of the ongoing bailout program.