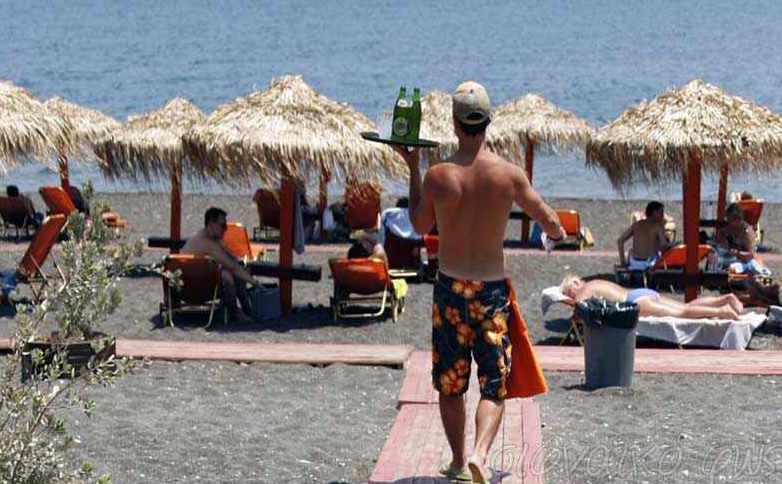 Financial police inspectors found delinquency rates ranging from 50-100% during raids on major tourist resorts in Greece over the last month, including the cosmopolitan islands of Mykonos, Santorini, Zakynthos and Corfu, the Greek police revealed on Monday.
In some cases inspectors proposed that businesses be closed down, while samples were taken on the island of Zakynthos to check for adulterated alcoholic beverages.
Financial police inspected a total of 119 businesses between June 17-July 16 to check for compliance with tax and social insurance laws, finding a total of 80 violations. The appropriate government agencies have been informed so they can impose any administrative penalties envisaged.
More specifically, a total of 27 violations were ascertained during inspections on 45 businesses on the island of Zakynthos, during which inspectors also seized bottled of alcoholic drinks for testing. Nine violations were found during inspections on 14 businesses on Mykonos, five violations in the inspection of six businesses on the island of Santorini and six violations in nine businesses on Corfu.
Rates of delinquency were even higher on the mainland, with 19 violations ascertained during checks on 20 businesses in the Thessaloniki area, three during 10 inspections in Argolida, six during 10 inspections in Halkidiki, and five out of five in Pieria.
The police said that inspections will continue at the same rate throughout the summer months and urged the public to report businesses violating the law — by failing to issue receipts or in other ways — either anonymously or openly at the phone line 11012 or the websites 11012@hellenicpolice.gr and financialpolice@hellenicpolice.gr.
(Source: ANA-MPA)