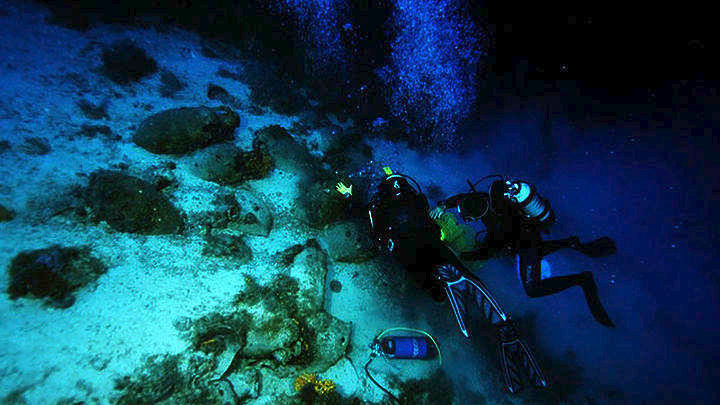 The remains of eight shipwrecks from periods spanning the Classical ancient Greece to the first half of the 20th century were discovered in an underwater exploration conducted by the Ephorate of Underwater Antiquities in the Fournoi archipelago in the Aegean, on June 9-29.
The search was carried out with the support of the R.P.M Nautical Foundation in order to locate, record, verify and study ancient, medieval, and more recent shipwrecks in the area.
According to a culture ministry announcement, the finds included a 4th century B.C. ship carrying a cargo of amphorae from Chios, a Roman shipwreck loaded with Dressel 38-type amphorae for salted fish from a workshop in Spain, to later Roman-era shipwrecks with 6th and 7th century A.D. amphorae and a wooden craft of the mid-war buried that sank a short while after 1929.
Samples of the finds on the various shipwrecks were brought to the surface, the ministry said, while the variety of the cargo and the presence of cargo imported from outside the Aegean confirmed the conclusions of research conducted in 2015 and 2016 that the Fournoi archipelago acted as an important hub for sea traffic, which was part of a broader network of maritime routes in antiquity.
A total of 53 shipwrecks have so far been located and confirmed in the area, together with those found in 2015 and 2016. In addition to these, the search revealed isolated artifacts such anchors or jettisoned pottery that served as indications of the intensity and extent of navigation and trade movements in the area, the announcement said.
Source: ANA-MPA