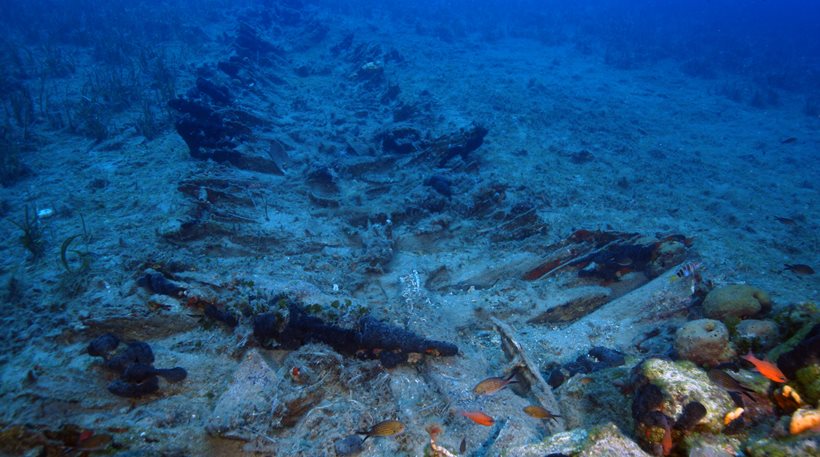 Important underwater archaeological finds were discovered in the area of Fournoi near the Greek island of Ikaria. In total, traces of 23 wrecks from various eras were located. The operation began on June 8 and was completed on July 2, according to the Greek Ephorate of Underwater Antiquities, with the support of the RPM Nautical Foundation.
The area exploration was concentrated mainly in the coastal zone, reaching depths of up to 65 meters. Authorities identified and documented traces from 23 shipwrecks dating from the end of the archaic period to the 19th century. The total number of detected and documented shipwrecks discovered in the area since 2015 amount to 45, making the Fournoi archipelago the richest in Greek area with ancient shipwrecks and one of the richest areas in the Mediterranean Sea. Apart from the shipwrecks the authorities also discovered hundreds of individual finds, mainly pottery items and anchors that show the scale of maritime navigation and freight traffic on this key maritime crossroads of the eastern Aegean.
It is estimated that the area investigated corresponds to less than 15% of the total coastline surrounding the Fournoi island group. It is expected that the ongoing research in the area will lead authorities to locate an even larger number of shipwrecks, allowing archaeologists to understand the use of marine space and study of the maritime navigation and freight traffic in the archipelago in different eras.
It is estimated that the surface research operation to locate more shipwrecks will come to an end in 2018. Later, taking into account the mapped shipwrecks, archaeologists will focus on an excavation mission to explore the significant historical importance of shipwrecks.