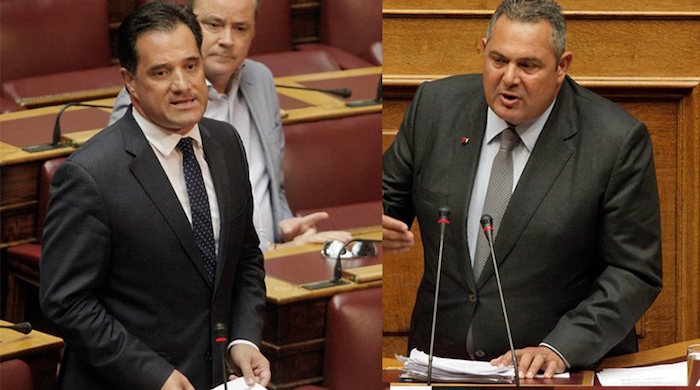 The alleged links between a Greek shipowner, the drug-laden Noor 1 freighter carrying 2.1 tonnes of heroin, and a phone call made by Defense Minister Panos Kammenos to an inmate in prison — as well as main opposition New Democracy’s (ND) interest in the case — were the objects of a heated and highly voluble spat between Kammenos and ND Vice President Adonis Georgiadis in Parliament on Monday.
“I knew Mr. Georgiadis as a good book salesman from television. I did not know him as a defender of those involved in criminal cases. You are worth your salary, Mr. Georgiadis,” Kammenos said, in response to Georgiadis’ demand that Kammenos explain his call to inmate Makis Giannousakis.
The minister admitted making the phone call, then turned his fire on ND’s leadership and alleged that “society is abuzz about the links between the Greek shipowner Vangelis Marinakis and the Mitsotakis family.” Kammenos accused Greek opposition New Democracy (ND) of attempting to shield the businessman from criminal investigation, although Marinakis has never been charged in the case.
“I called from my own phone and did my duty. My duty when an inmate comes and tells me that he is afraid for his life and wants to report so-and-so is not to protect that someone but to protect the witness,” he said. Kammenos said that Giannousakis had expressed fears that he would be killed, “like the rest of the prosecution witnesses in the case, if he revealed all he knew.”
The minister noted that the Noor1 case involved a massive drug trafficking operation and possibly oil as an exchange for financing terrorism. As such, he said, the case was linked to the security of Greece – since it also involved Turkish drug traders — and thus concerned the defense minister. He accused ND of “providing clear support to a suspect involved in four [criminal] cases, who has been named by Giannousakis.” Kammenos was replying to a question tabled by Georgiadis in Parliament, in which he asked the minister to explain in what capacity he had contacted Giannousakis, what was said and whether he had also spoken with a specific coast guard officer involved in intercepting the Noor 1.
In addition to Kammenos, Georgiadis had extended his criticism to government spokesman Dimitris Tzanakopoulos and Justice Minister Stavros Kontonis. “If Vangelis Marinakis is guilty of drug smuggling let him rot in jail. But that is something that Greek justice is competent to decide, not Mr. Kammenos, or Mr. Tzanakopoulos or Mr. Kontonis.” If Kammenos had in fact spoken with Giannousakis, Georgiadis added, this was a “violation of the criminal justice code on abuse of authority”. According to Georgiadis, Kammenos had spoken with the inmate for 21 minutes in 12 separate calls.
According to Kontonis, who also replied to questions on the Noor1 case in Parliament, nobody was immune to the investigation, no matter how influential, and all reports would be followed up, even the contradictory reports made by the specific inmate. He announced that Greece will ask the United Arab Emirates authorities for any evidence in the case relating to Dubai.
(With information from ANA-MPA)