GRNews
GreekReporter.comBusinessPercentage of Closed Shops in Central Athens Up to 28 pct in... 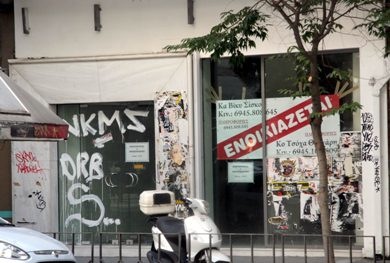 The percentage of closed shops in downtown Athens grew by half percentage point to 28 pct in the first months of 2017, reversing a declining trend which prevailed in the second half of 2016 and returned to September 2015 levels, the Hellenic Confederation of Commerce and Entrepreneurship (ESEE) said.
Vasilis Korkidis, president of ESEE, in comments made to Austrian TV, said the percentage of closed shops was almost unchanged in central shopping areas of Athens, it improved in regions of medium and high income and deteriorated in areas of low income.
More specifically, in the commercial triangle of the Athens center, the percentage of closed shops was 23 pct, up from 21 pct in 2016, followed by the Kolonaki area (unchanged at 25 pct), followed by the Exarhia area (35 pct) and central roads such as Stadiou, Panepistimiou and Academias (33 pct) which showed a slight improvement.
(Source: ANA-MPA)