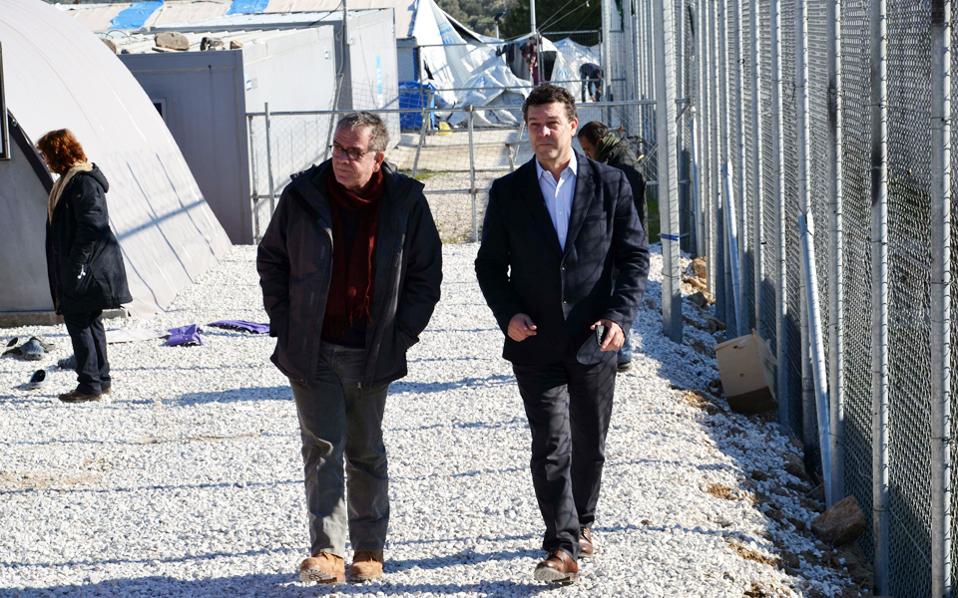 Migration Deputy Minister Yiannis Mouzalas announced on Monday that refugees will be getting cash instead of free meals and will be staying in rented apartments in order to decongest migrant camps.
In a joint press conference with the participation of Representative of the United Nations High Commissioner for Refugees (UNHCR) in Greece Philippe Leclerc, President of Union of Municipalities of Thesssaly Giorgos Kotsos and Larissa Mayor Apostolos Kaloyiannis, Mouzalas explained the project of decongestion of migrant camps and relocation of refugees in urban centers and smaller municipalities.
Mouzalas said that refugees will be getting cash in hand for their meals instead of rations and will be staying in apartments under the UNHCR program, so that they will be getting primary care. The program applies for 10,000 asylum seekers in 2017 and another 10,000 in 2018.
The deputy minister clarified that the apartments will be rented by owners under free market conditions and the municipalities will assist the implementation of the program. This way, he said, local communities will benefit financially. The program will apply provided that the EU-Turkey agreement for refugee returns will continue to apply.
This way, Mouzalas continued, the 40 camps across Greece that host 40,000 asylum seekers will be reduced to 17-20 with a maximum of 500 people each for 2017. In 2018, another 10,000 asylum seekers will be relocated under the program.
The project will start with 500 refugees leaving the Koutsohera camp and moving to Larissa, a municipality that expressed interest in the program. As the program progresses, the camps in Thessaly (Koutsohera, Volos and Trikala) will eventually close and refugees will relocate in municipalities.
“The UN will help in the expansion of the hospitality program for refugees in apartments to improve their living conditions,” Leclerc said.
The program has already been implemented in Athens, Thessaloniki and Livadia. The president of the Union of Municipalities of Thesssaly underlined that the program gives municipalities the opportunity to inject money to local communities through the leasing of the apartments and the cash the refugees would spend on food.
The Larissa Mayor said that “The municipality of Larissa will work in this direction. Previously there was pressure to accommodate migrants in apartments, but it was too early. Today we are not afraid to do it.”