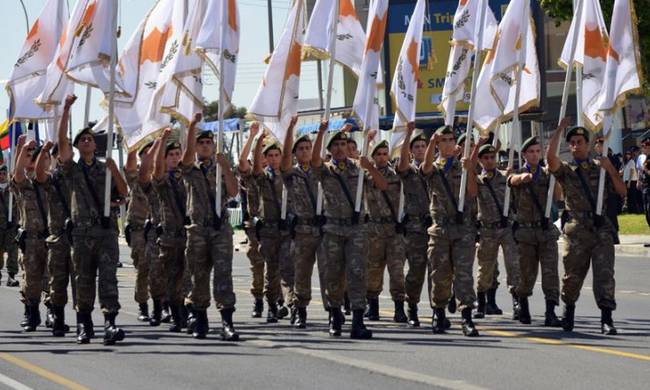 Each year, March 25th and April 1st marks the day when revolutionary Greeks took up arms against the Ottomans and the EOKA fighters rose against British colonialism. Both revolutions liberated the Hellenic nation. They did so because of a spirit of defiance driven by a strong leadership; a leadership with a vision to defend the nation from foreign domination!
Thousands of Greeks celebrate that glorious past and a sea of “blue-white” flags or “Γαλανόλευκη,” are raised in the air in lively parades that make people proud of their ancestry.
Today it’s a different story. That wonderful revolutionary Greek spirit of defiance has fizzled out a long time ago and has been replaced by inglorious politicians and their petty political parties and in so doing, reduced Greece and Cyprus to a humiliating subjugation to a group of bankers, plutocracy and the EU.
Things in Cyprus went one step further; citizens are gradually programmed to question their Hellenic roots. It’s as if they are trying to wipe out any Hellenic historical reference of the past. The recent fiasco with the 1950’s referendum speaks clearly as to what kind of people govern Cyprus.
This is the New Greek spirit of the day; one of complacency, corruption and national scandal without a strong leadership to do the right thing. In the name of political correctness, the BBF would certainly destroy Hellenism on the island. Yet, politicians continue to push and humiliate the nation with their behavior to sign such a BBF deal that would legalize the presence of thousands of Muslim settlers and refugees on the island. Muslim birth rate would certainly change the demographic character of Cyprus forever.
Today it’s a sad day in remembrance of those brave men and women who had given up their lives for freedom and now lay in forgotten graves. One asks – is this what they died for? I don’t think so!