TechNews
GreekReporter.com Greek News Cyprus President Anastasiades Calls on EU 27 to Respect their Signature on the... 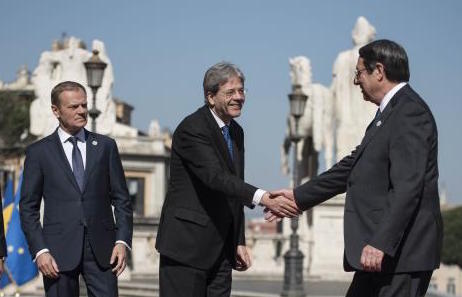 President of the Republic of Cyprus, Nicos Anastasiades, called today on the EU leaders to respect the commitments they undertook in signing the Declaration of Rome, with particular emphasis on the principle of solidarity and the implementation of the community acquis towards all member states, without exception.
“In addition to the historic day and the great importance of today’s ceremonies, that signify the re-foundation of Europe on some new basis, I hope that all those who signed the Declaration of Rome and especially the big states which play an important role in this, will be consistent with their commitments, especially not forgetting the principle of solidarity, and respect for the European acquis without exceptions, towards all the states and especially for the EU citizens,” the President stressed.
(source: ana-mpa)