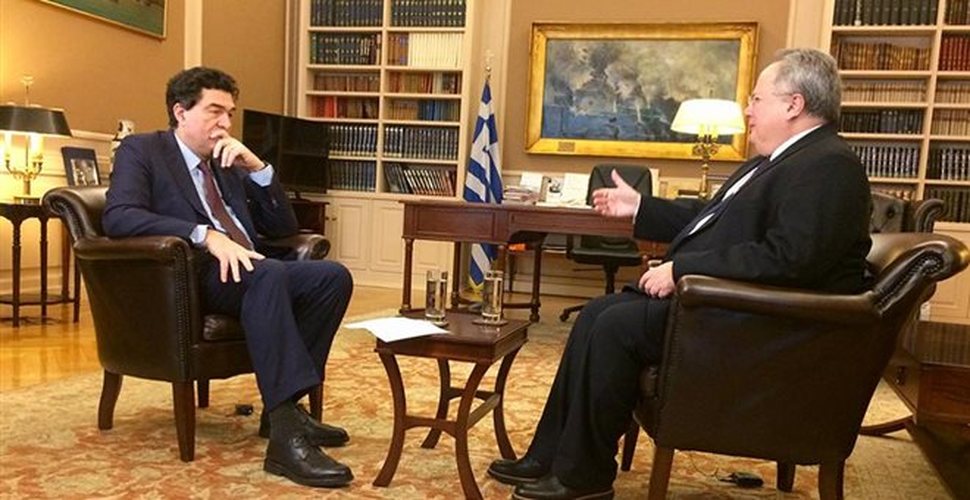 Foreign Minister Nikos Kotzias on Tuesday warned that Greece “will not always be tolerant” if Turkey continues to violate air space and territorial waters in the Aegean.
The Greek official spoke on Skai television saying that Ankara came very close to crossing the “red line” after a Turkish coast guard boat fired live ammunition during an exercise in Greek territorial waters near Farmakonisi island on Friday. Kotzias called the incident a “serious violation of international law.”
The Greek minister assumed a more serious tone saying that “Turkey should know that we will not always be tolerant, that our response will not only be the one that we gave then, that it will be much harsher.”
Kotzias attributed Turkey’s repeated provocations in the Aegean as a result of the political and social turmoil in the neighboring country and the Turkish president’s talk of expansionism.
“Some people in Turkey think that Greece could be like Syria or Iraq… But Turkey is making a mistake” in believing that Greece is weak with regard to its defense because of the economic crisis. He stressed that, “Our care for the security of our country and its sovereignty is greater than in the past,” adding that Greece has international law on its side.
Kotzias further said that tension between the two neighbors intensified after the Supreme Court decision to not extradite eight Turkish army staff who sought asylum in Greece after the coup attempt in July. Nevertheless, he said, political instability was present in Turkey long before the extradition case.
Regarding the ongoing talks for the reunification of Cyprus and Turkey’s stance, Kotzias said: “The issue of the presence of occupation troops and the system of guarantees is Turkey’s weakest point on Cyprus… [Turkey] is at a point where either it will make a real and substantial compromise and concessions, or it would come to the point to break the deal.”