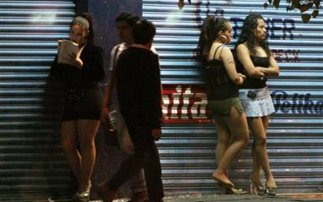 An Athens Misdemeanours Court acquitted a group of HIV positive women arrested in 2012 and charged with repeated counts of grievous bodily harm on the grounds that they were transmitting the HIV/AIDS virus by working as prostitutes and having unprotected sex. The arrests were made when Andreas Loverdos was minister and caused a huge stir at the time, since authorities had published photographs and personal details of the women arrested “to protect public health”.
The case concerned 11 women addicted to drugs, three of which have since died. They were acquitted of the grievous bodily harm charge, while the charges of prostitution had been converted to a minor offence and became statute-barred. The court adopted the public prosecutor’s position recommending that they be acquitted because the state had not proven the charges against them.
“In no way is it shown that the accused were engaged in prostitution, in no way that they came into sexual contact with other individuals without using a condom nor, apart from the first of the accused, that they knew they were HIV positive,” the prosecutor noted. As such, the malicious intent required to support a charge of grievous bodily harm was not proven, she added.
The court’s ruling was greeted with applause in the audience and tears of relief from the defendants.
(source: ana-mpa)