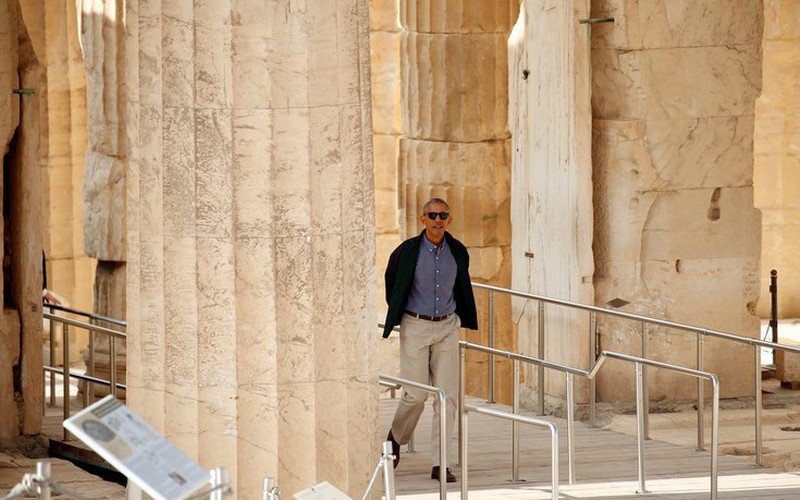 The announcement of the visit of U.S. President Barack Obama to Greece was met with mixed reactions, which became even more mixed after the rather unexpected loss of the Democrat candidate, Hillary Clinton who was endorsed by Obama.
Clinton would have continued the policies of her predecessor, but the Donald Trump victory changed expectations radically. The question that immediately came to everyone’s lips was, “Can the outgoing president influence Trump to have a favorable stance toward debt relief for Greece?”
The Greek government had high expectations for the U.S. President’s visit. Sliding in polls, uncertain whether the bailout program review will be completed on time and bloodlessly while society was already showing its anger toward the harsh austerity measures imposed, the Obama arrival and some encouraging words from the U.S. President would show that they have managed to get vital support in the request for debt relief measures.
President Obama delivered that. “As Greece continues its reforms, the IMF has said that debt relief is crucial. I will continue to urge creditors to take the steps needed to put Greece on a path towards a durable economic recovery, because it is in all of our interests that Greece succeeds.” he said in his press conference on Tuesday. Words that made Alexis Tsipras smile, after days of frowning seeing opinion polls against his favor.
Greek citizens smiled as well. Despite some nagging about the strict security and traffic control measures during Obama’s moves in Athens, the citizens of the capital felt that they live in an organized city and were reminded that Democracy started here. In addition, they felt that they are worthy of the honor to have as visitor the leader of the world’s superpower.

“We have inspired each other to reach for independence, stood in solidarity during war and peace, in good times and in bad, including these very difficult years for the Greek people. And tonight, I want you to know as you work to move your country forward, you will always have the support and friendship of the United States.” These were words that stroke the wounded pride of many Greeks, who saw three different governments parading the world, asking for financial aid like beggars in the past five years. For two days they felt like citizens of the world. Much more so when Obama praised them for their treatment of refugees and finished his speech with a heartwarming “Ζήτω η Ελλάς!” (Long live Greece!).
The U.S. President also tended to his nation’s interests. NATO and energy are key concerns to the U.S. side at the moment. The U.S. needs to maintain NATO forces in the Aegean to deter Russia‘s aspirations for the Eastern Mediterranean. At the moment, NATO ships are in the Aegean in order to keep maritime borders between Greece and Turkey. The U.S. would like to keep these forces permanently.
Then there is the energy issue. The U.S. wants to reduce Europe’s dependence on Russian gas and bring U.S. natural gas to Greece. At the same the U.S. wants to prevent potential Russian influence on Greece. Good relations between the two countries must be maintained.
Greek government officials were happy that the U.S. President talked about debt relief and Obama was happy that he gave his final speech abroad at the cradle of Democracy and Western Civilization. As for us ordinary citizens, it was good to be reminded that Greece is not only “that little country with the big debt” as it happens in the past five years.
Now, as Air Force One is in the air heading for Berlin, our eyes and ears will turn to Germany to see what the U.S. President will say during his visit to Greece’s biggest creditor.