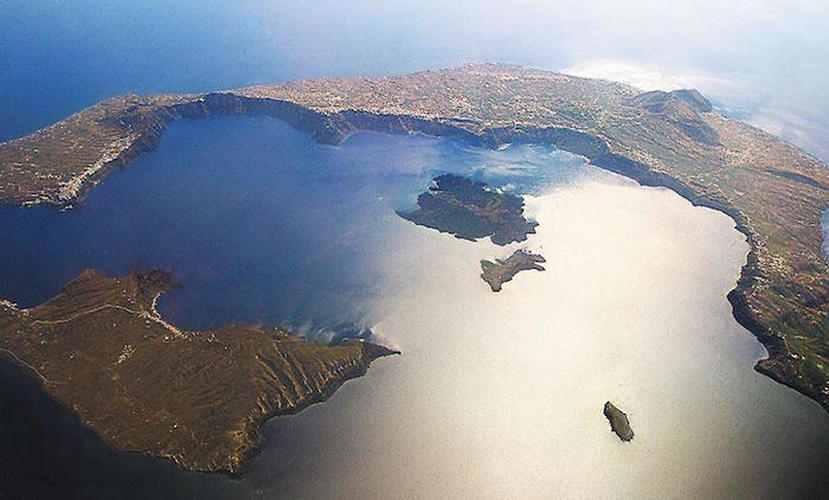 Scientists presented their study on the different stages in the creation of the caldera and came to the conclusion that the catastrophic tsunami that roared through the prehistoric Aegean following the explosion of the volcano at Thira (Santorini) was not caused by the collapse of the caldera as initially believed. They believe that it was caused by the huge amount of volcanic matter that suddenly landed in the sea.
The eruption took place some time during the mid-second millennium BC and was the focus of a new paper in Nature Communications, by Paraskevi Nomikou from the University of Athens and her colleagues. The group published high-resolution seabed maps and combined these with seismic evidence of the rocks that the seabed is made of in order to explain how the volcano collapsed, filled with water and managed to produce devastating tsunamis across the eastern Mediterranean, smashing into the Minoans on Crete at a time when they were one of the world’s most advanced civilizations.
Prior to the eruption the modern caldera did not exist. There was a smaller caldera at the time from an older eruption that formed a lagoon at the north of the solidary island. The eruption blasted ash high into the sky that settled back on the farmland. The result was terrifying but not catastrophic, giving the locals ample warning to abandon the island — hence, no archaeological discoveries of bodies found. As the volcano spewed ash, the sky would have been dark and drifting eastwards, explaining why ash from this eruption has been found in Turkey, the Aegean islands and Crete.
In the next stage of the eruption, there were pyroclastic flows, hot landslides of volcanic material that travel faster than F1 cars, charged out of the volcanic cone building up large fans that blocked the northwest straits and isolated the caldera from the Mediterranean Sea. As it grew in violence with multiple cones spewing out pyroclastic flows there were deposits reaching 60 meters in thickness and engulfing the Minoan settlement at Akrotiri in what was a Bronze Age Pompeii.
Nomikou and her colleagues propose that tsunamis would have been generated from these flows. In Crete, 120km away, a nine metre-high wave swallowed the northern side of the island. After the seas settled, the eruption ended, and the modern caldera began to form, eroded by the sea and a catastrophic landslide that opened the north-west strait, filling the caldera in a couple of days. Further landslides into this full caldera formed the southwestern straits. Completing the modern geography would take several thousand years more as the island of Nea Kameni, an active volcano, gradually erupted above sea-level.
Though Santorini was not recolonized, evidence from pottery shows civilization on Crete continued for several generations.