GRNews
GreekReporter.comGreeceThe Duty of Repeating the Proud 'OXI' of October 28, 1940 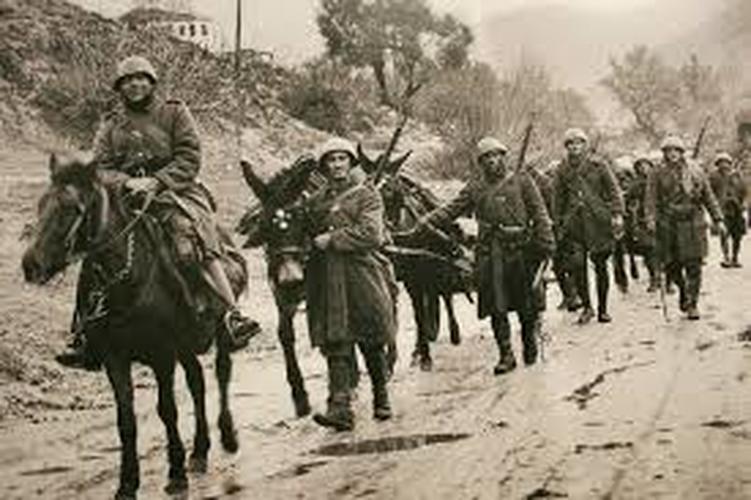 World War II started in September 1939, but Greece felt it for the first time when an Italian submarine torpedoed Greek warship “Elli” in August 15, 1940, during the feast of the Virgin Mary on Tinos.
On the morning of October 28, 1940, the ambassador of Italy to Greece, Emanuele Grazzi, handed to Prime Minister of Greece Ioannis Metaxas the ultimatum with which Benito Mussolini, the leader of Italy, called for the surrender of certain strategic sites in Greece.
What followed became a historical moment for Greece: The Greek prime minister said a glorious “NO,” knowing that there is no greater good than freedom. Using the language of diplomacy, Metaxas’ actual reply was: “Alors, c’est la guerre!” (So, this is war).
Greek people gave the same reply hours later, when they took to the streets shouting that they will fight for their homeland.
Mussolini’s army, 100,000-strong gathered in Albania, ready to attack the Greek northwestern border. The Italians believed that it would be easy to take over Greece within days.
At first, Mussolini’s ambition seemed to be winning. The Greek armed forces made a minor retreat initially, losing some ground. However, on November 14 the counterattack began and Greek troops fought bravely winning battles in the mountains of Epirus and Western Macedonia.
Despite being outnumbered, Greek soldiers not only managed to push the Italians back to Albania, but also managed to liberate Greek towns in Northern Epirus such as Saranda, Pogradec, Gjirokastra, Himare. An attack made by the Italians in the spring, had no effect. The Greek army defeated them again.
The mountainous terrain of Epirus and Western Macedonia played an important part. It served in providing great natural fortresses, helping the Greeks to organize strong defensive positions. Even the harsh winter conditions helped the efforts of Greek soldiers. Even though they suffered as much as the Italians, they sustained.
Other than bravery, the strongest weapons in Greece’s armory at the time were national unity and Greek Orthodox faith, helping the homeland emerge with a great victory.
When Mussolini realized that he lost the war against the Greeks, he sought help from Nazi Germany. In April 1941, German troops attacked from the north. Again, the Greeks gave another brave “OXI” to the axis. This time it was the saga of the Metaxas border forts along Macedonia. The Greeks fought like heroes again, delaying the advance of German troops to Russia.
The German Occupation that followed was one of the darkest times in Greek history. For almost four years the population suffered from hunger and deprivation, torture and executions. But very soon Greeks regained their strength to rebel against the invader. The men who fought in Epirus organized guerrilla groups in the mountains, while others fled to Egypt where a new Greek army was formed to fight alongside the allies.
The “OXI” of October 28, 1940 was one of the greatest achievements of the unity and determination of Geeks. It stands close to the 1821 War of Independence. It symbolizes the eternal struggle between the righteous and the unjust.
Unfortunately, through the years, the meaning of that “OXI” was exploited by political powers that used it for their own shady purposes, and certainly not for the good of the homeland. October 28, 2016 finds Greece at another dark point in its history. On the verge of the country turning into a country of poor people, the government is trying its best to divide the Greeks and turn them against each other in order to stay in power. The words “homeland,” “unity” and “Greek Orthodoxy” that drove the great men of 1940-1941 are never on the lips of those who govern. Instead, they are trying to rewrite history books and use the word “democracy” in abundance, after showing they have little respect for it.