GRNews
GreekReporter.comGreeceFour Dead After Flood in Kalamata, One Missing in Thessaloniki

Four Dead After Flood in Kalamata, One Missing in Thessaloniki 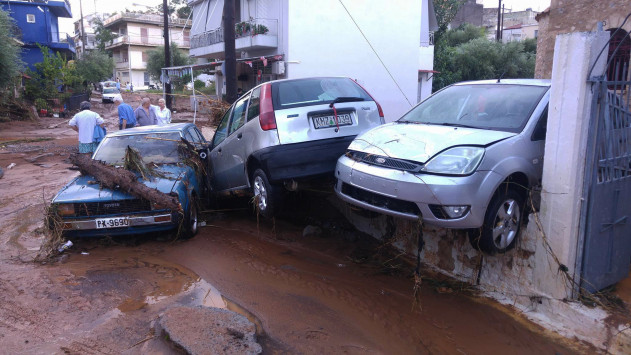 Four people are dead in Kalamata and Lakonia, the Messinia region, and one missing after killer floods hit Greece early Wednesday morning. All four deaths took place in the southern Peloponnese region.
Two women, aged 80 and 63 years, were found dead in their basement homes around Kalamata. A man, aged 90, was also killed in the same region. Meanwhile at Lakonia, near the vicinity of Sparta, further east, the corpse of a man, aged 73, was pulled out of a swollen sea bed.
Kalamata Mayor Panagiotis Nikas spoke to Skai radio and confirmed the death of a disabled woman and the death of two elderly men. He also said that one woman is missing.
The rainstorm started at 4 a.m., and according to a local meteorologist in one hour 140 millimeters of water had flooded the region the water reached two meters in some areas.
Nikas said that dozens of livestock drowned in the floods and dozens of cars were damaged, not counting the damages in homes and farms. Many cars were pushed by rushing waters and fell in the sea.
The mayor also said that materials for the construction of a ring road around the city were swept away by the water and blocked the main highway and several roads. Fire department vehicles were unable to reach several points where water pumping was needed.
About 80 students remained trapped in the building of the local technical college, while dozens of residents were trapped in their homes. The mayor said that the area should be put in a state of emergency.
Meanwhile in Thessaloniki, and especially in the Michaniona area, one woman went missing and many homes and cars suffered damages. The fire department received 500 calls for pumping water.
Several national highways have been blocked in spots, especially the Athens-Kalamata and the Tripoli-Kalamata highways. Sparta is also hit by the rainstorms but to a lesser degree and the Gytheio-Sparta highway is blocked at certain points.