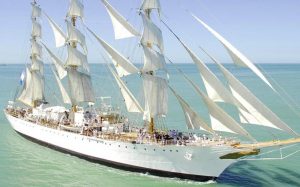 A memorial outside the Buenos Aires Naval Academy in Argentina features Hydra-born mariner Nikolaos G. Kolmaniatis (Nicolas Jorge Colmaniatis), who emigrated to Argentina in 1811, enlisted in the navy as a sailor, and rose through the ranks to become Rear Admiral. 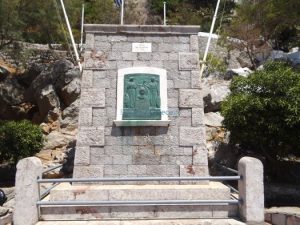 Kolmaniatis is honored as a national hero in Argentina because he fought in the Argentinean War of Independence against Spain, leading and training its newly-formed Navy. Samuel Spiro, a fellow Greek immigrant and navy officer, is also honored in Argentina. He scuttled his ship in the Uruguay River rather than surrendering it to the Spanish Navy.

Both Kolmaniatis and Spiro were given the ultimate honor of having two Argentinian naval ships christened after them, which occurred in 1937.

This special connection Greece has to Argentinian naval history was reinforced in September of 2016, when the three-masted Argentinian training vessel, the frigate “Libertad” (Freedom) docked at the port of Piraeus as a sign of friendship between the two maritime countries.

It later made an official visit to the port city of Hydra, where a special ceremony paid tribute to the two great Greeks who had helped their country win independence.

Built in 1956 and commissioned in 1963, the Libertad was in Greece as part of its 45th instruction cruise, dubbed the “Bicentennial Voyage,” marking 200 years since the birth of the Republic of Argentina.