‘The Wedding Party’: How Thane Economou Made a One-Shot Comedy 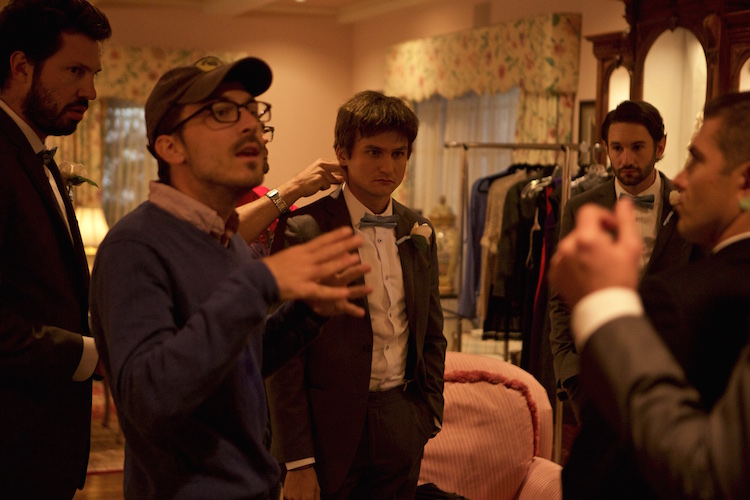 We interviewed up and coming Greek-American director Thane Economou about the making of his feature film debut “The Wedding Party”, a movie he was initially told would be an impossible feat to film.
Economou decided to go ahead anyway and undertake the challenging project of shooting a 119 minute romantic comedy in one continuous take. His risk has paid off, as the film keeps racking up accolades from the likes of NPR and Sound & Picture Magazine, not to mention “The Wedding Party” has already been accepted into Fayetteville Film Festival and St. Louis International Film Festival.

In this interview, we discuss the success of Thane Economou’s movie, the challenges of the one-shot technique, how he got actors like Blake Lee (“Mixology”), Moses Storm (“Unfriended”), and Molly Burnett (“Days of Our Lives”) to come aboard his project, and of course, his Greek heritage.

If you haven’t yet, check out “The Wedding Party” trailer and laugh along as Blake Lee, playing a groomsman, tries to keep some sort of order at his best friend’s comically disastrous wedding reception.

How did you get started in film?

I studied film at Southern Methodist University in Dallas, but I came out to LA every summer for internships, so I also interned at the American Film Institute and National Lampoon. When I moved out to LA, I started to work in the industry as a development assistant at Lucasfilm and at a production company in 20th Century Fox. However, I’d always also been working on my own projects and my own writing on the side.

I wrote “The Wedding Party” about five years ago and connected with some producers that were really interested in taking on the challenge of the one shot project. We developed it for four years, and that whole time I was working with the Director of Photography Will Kamp to basically plan out the shots, cause it took years and years to get just right.

Then the financing came through in early fall of 2015, and finally, we set into pre-production!

You got some really cool film and TV actors to come on board. What was it like working with them, and collaborating to get that one-shot take just right?

We got our star Blake Lee first, from “Mixology”, and the rest of our cast came on board partly because they were so interested in the challenge of doing one shot. For an actor, it’s an incredibly cool and different experience, because they get to live out the entire arc of their character without anyone yelling “Cut!”. So that was very attractive to them, this kind of new challenge. They were able to have a more play-like experience. 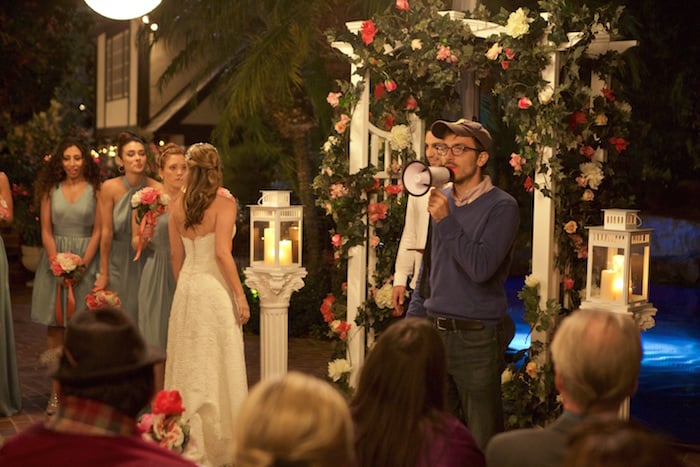 How long did filming actually take?

Well, we had three weeks of rehearsals with the actors and the camera crew. For the actual filming, we had one day of dress rehearsal and three days of shooting, at which point we shot the film a total of five times (we ended up using the fifth take), start to finish.

We tried to model our structure off of an off-Broadway play: mainly, very rehearsal heavy.

What inspired you to come up with the idea for “The Wedding Party”?

In the summer of 2011, I was a groomsman in three wedding in five weeks, so I was kind of on wedding overload. Anyway, I was going to all these weddings and seeing all these crazy things happen, especially at wedding receptions.

So after I came home, I said I wanted to write the ultimate wedding reception movie, and I knew I wanted it to be in real time so it would feel as immersive as if you were at the party yourself.

What aspect does the one-shot give the film that a traditional filming method may have left out?

For me, it was about creating a fully immersive experience. I wanted it to feel more real and immersive, specifically because my film was a comedy, and you don’t tend to see this shooting style with a broad comedy. I thought it would make the awkward humor all the more awkward, and it would make the more dramatic moments all the more realistic. My hope is that it makes you feel like you are a guest at the wedding.

A lot of people approach the long takes, or one-shots, trying a bit of technical bravado. But for me, I feel it ties in with the thematics of the film, which is all about accepting imperfection, and how life just pulls you along even if you’re not ready for it. So for me, the technique of the film is an essential part of the film itself.

What are your eventual goals with the movie?

We are aiming to submit and attend as many film festivals as possible. I think we have a really unique film but I want to get it in front of as many eyeballs as possible. So we’re going to do festivals for the foreseeable future. Eventually the plan is to find a distributor and get this out to the public.

What’s your connection to Greece?

I am full Greek on both sides; all of my grandparents had come over from Greece.  I have family all the way from Methoni to up in the mountains in Redina, so I’ve gone back on a steady basis my whole life. The first time I went back was with my yiayia and pappou, they took me for five weeks. I got to spend most of the summer traveling around the islands, as well as Methoni and Redina.

I also went as a camper to Ionian Village, and as a counselor some years later. So it’s been great to have these different opportunities to go back over the summers, and of course we always had family coming from Greece and staying with us in Tulsa when I was growing up.

How have you found the Greek-American community in Hollywood?

I feel I have a strong community of Greek-Americans here, specifically ones I met at camps and church growing up. I’ll meet someone and recognize the last name, and it will start up a conversation, and before you know it, it turns out to be the same person I went to GOYA basketball tournaments with growing up. It’s happened on plenty of occasions and I definitely try to keep in touch with those people.

Follow the movie’s showtimes and released by liking “The Wedding Party”‘s FB Page, or checking the movie’s website.