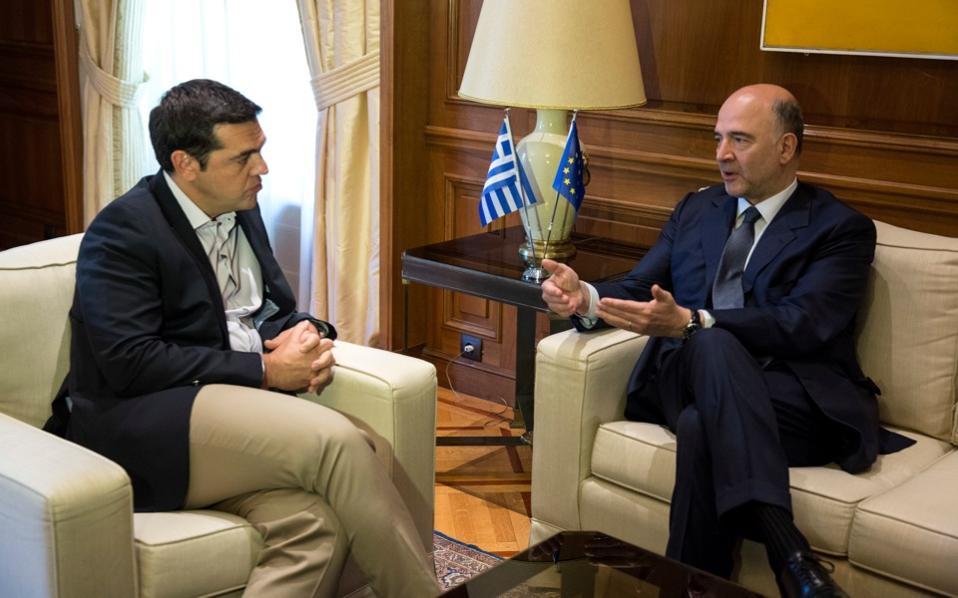 EU Economic and Financial Affairs Commissioner Pierre Moscovici met with Prime Minister Alexis Tsipras in Athens on Monday to discuss specific measures for the reduction of Greece’s debt. Moscovici said that the country needs to stick to reforms in order to retain credibility and earn further debt relief, adding that his visit was “a message of trust.”
He acknowledged that Athens has made progress on economic reforms, hence leaving the eurozone currency was no longer on the table. “It is time for normality, it is time for stability, it is time for implementation and it is time for investment,” said Moscovici following the meeting with Tsipras, however, he added that more needs to be done. “We still have a way to go and there are discussions taking place and the need to complete some milestones for the first review and also to discuss the so-called second review.”
Greece’s second bailout review, which includes unpopular labor reforms, is expected to begin in autumn. Moscovici said Greece should work closely with its international lenders – the European Union and the International Monetary Fund – and show ownership of the reforms prescribed in its third international bailout, for Europe to “be in a very good position to discuss, especially with the IMF, debt relief measures.”
Emerging from the meeting, Moscovici said that Greece was on its way toward exiting the crisis. “We are no longer talking about Grexit,” he said. “I wanted to come here one month after the visit by [European Commission President Jean-Claude] Juncker to show that the Commission stands by the side of the Greek government and the Greek people, in order to continue the reforms that are already generating results in the real economy,” he said.
Meeting with Greek FinMin Euclid Tsakalotos
During a joint press conference with Finance Minister Euclid Tsakalotos, Moscovici said that the EC never wanted a Grexit and is now facing a Brexit. He said that this saddened him.
Regarding Greece, Moscovici said that Greece will recover when a credible debt solution is found, and Greeks needed to be united.
Tsakalotos said that a solution for debt relief needs to be found before Christmas.“It is obvious that primary surpluses depend on an agreement on debt,” said Tsakalotos.
He said that Greece needs a different relationship with creditors and called for greater freedom regarding the administration of the bailout program. He added that Moscovici agrees that the prior actions need to be completed as soon as possible.
The two men discussed the Pension Solidarity Fund (EKAS) during their meeting, with Tsakalotos maintaining that the Greek government is fully aware of the problems that people are facing.
Moscovici said that decisions on Greek debt and the role of the IMF for the Greek program will be decided in autumn once prior actions are completed and the first review and second review are done. He expressed the EC’s desire for the full participation of the IMF in the Greek program. He did not agree to a review of primary surplus targets for Greece before 2020.