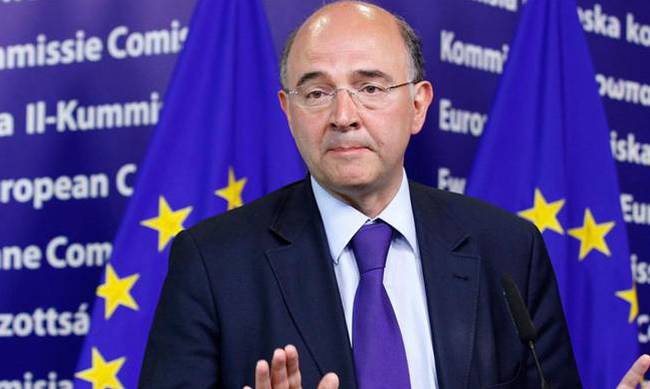 In a statement to the ANA-MPA on Thursday, European Commissioner for Economic and Financial Affairs Pierre Moscovici said he was confident that the next Eurogroup will decide to disburse the first installment of a loan tranche to Greece, amounting to 7.5 billion euros.
“I am certain that…at the Eurogroup next week in Luxembourg we will be in a position to decide the disbursement of 10.3 billion euros for Greece, of which 7.5 billion will be given immediately,” he said.
While taking part in a panel discussion on structural reforms alongside Greece’s Finance Minister Euclid Tsakalotos at the Brussels Economic Forum, Moscovici said that Thursday’s Euro Working Group meeting will examine the country’s progress in implementing prior actions and ratify the discussion that has already taken place.
The Commissioner noted that a very significant step in this direction was made at the previous Eurogroup. “Since then, we have been working seriously and in a positive way to solve any problems that exist, one after the other. I believe we are very close to achieving this,” he said, predicting a “good” Eurogroup next week that will “confirm that reforms are progressing in Greece.”
Moscovici said that the imminent release of 7.5 billion euros will provide a “real source of oxygen” for Greece’s economy and that the goal was still a return to growth, recovery of investor confidence and the creation of jobs.
He said that the Commission forecasts a return to growth in Greece in the second half of 2016 and 3 percent growth in 2017, while noting that these assumptions are based on the success of the Greek program.