A total of 121 masterpieces of Byzantine art will be exhibited at the State Hermitage Museum of St. Petersburg in Russia until October 2.

The opening ceremony of “Byzantium Through the Centuries” took place on Friday. The exhibition is part of “2016: Greece-Russia Year” celebrating the historical and cultural ties of the two nations. It is a collaboration between the Hellenic Ministry of Culture and the Hermitage Museum.

Until October 2, the Russian public will have the opportunity to admire masterpieces of Byzantine art of high historical and artistic value, with exhibits borrowed from 22 public museums and church collections in Greece.

Parts of mosaics and frescoes, portable wooden icons, manuscripts with unique decor, sculptures, pottery, jewelry, small objects coming from all periods of Byzantine culture, present the cultural dimension of a majestic empire and certify the artistic effect which is visible in contemporary art.

The narrative starts from the early Byzantine period, when the echoes of antiquity were more intense, and reaches in the years after the Fall of Constantinople and the Byzantine Empire.

The exhibition closes with “Saint Peter” by El Greco from Greece’s National Gallery, a symbolic work for St. Petersburg.

Exhibits attempt to illuminate the multinational character of the Byzantine state, its relations with its neighbors and its turbulent history; the history of an empire that covers 1100 years, which was established in three continents, matching the ancient Greco-Roman culture with the Orthodox Christian faith and the Byzantine worldview. It shows the world upon which the new Greek and Russian states are rooted and nurtured. 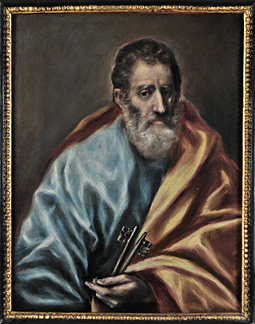