Corfu Tourist Season at Risk Because of Trash Pile-up 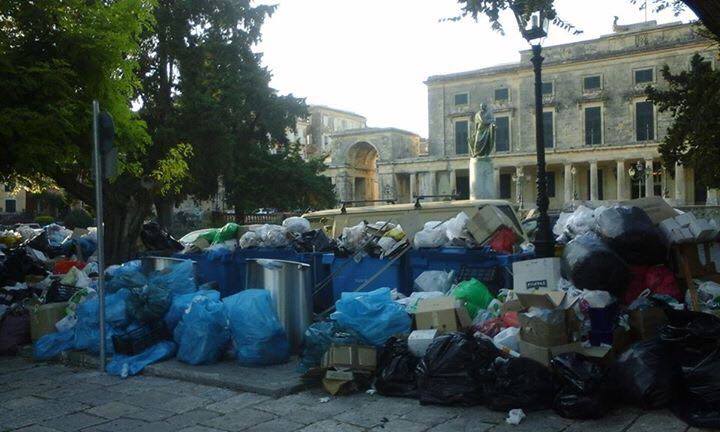 Corfu, one of Greece’s favorite holiday destinations, is losing tourists because of mounts of trash filling the city after the main landfill saturated.
Residents of Temploni have blocked the saturated landfill of the area. They complain that it has been years since authorities have promised to solve the problem of saturation of the trash dump. As a result, heaps of garbage appear at many points throughout the city of Corfu.
During the recent visit of Interior Minister Panagiotis Kouroumblis, locals jeered at him for not acting to solve the problem.
The garbage heaps have forced restaurants and shops to close, with the owners complaining that the tourist season is blown for them. The NUvino pizza Resto closed after posting a note saying, “NUvino pizza Resto will remain closed due to the amount of trash that is across from our restaurant. Thank you for your understanding.”
Meanwhile, tourist agencies are threatening to cancel flights to the island that has literally “drowned” in garbage. Locals sound the alert asking for the Temploni landfill to reopen.
The interior minister had a meeting with local politicians and island authorities. On Monday afternoon he visited Temploni along with Corfu Mayor Kostas Nikolouzos, Ionian Islands Regional Governor Theodoros Galiatsatos, General Secretary of Waste Management Evangelos Kapetanios and other officials. Kouroumblis asked from the Temploni residents to show patience for the two to three months remaining until the end of the tourist season during which a new plan for waste management on the island will be implemented.

The number of Covid-19 patients on ventilators in Greece on Friday has reached record highs, as 790 people are now intubated in the country.
Europe

In an attempt to protect and maintain the iconic monuments in the Greek Orthodox section of London's historic West Norwood Cemetery, the many sculptural...