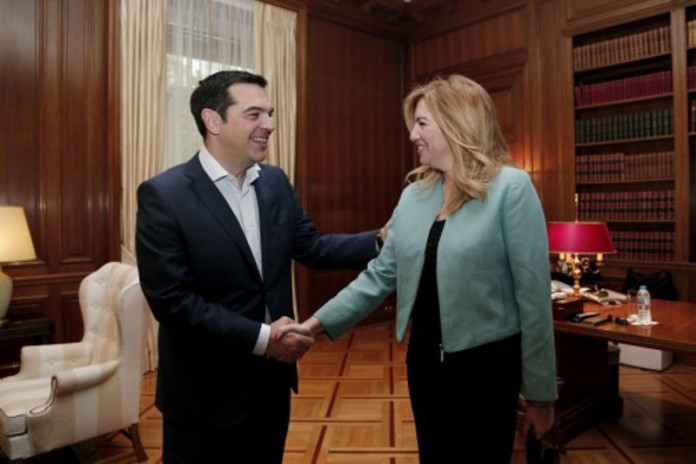 Prime Minister Alexis Tsipras held a round of meetings with opposition party leaders on Thursday to hear their views. Amid the meetings, he wrote on Twitter: “We are striving for changes to the election law and Constitution that are based on the broadest possible consensus.”
The prime minister received PASOK leader Fofi Gennimata at 4 pm, his second meeting in the day after his meeting with Communist Party of Greece (KKE) General Secretary Dimitris Koutsoumbas at noon. In a brief exchange before the cameras as Tsipras met Koutsoumbas outside the Maximos Mansion, the KKE leader noted that their discussion should be about the huge problems faced by the people, especially with taxation, rather than such issues.
Replying, Tsipras noted that a discussion had begun some time ago about changes to the election system and Constitution for which the time was ripe “but all these demand dialogue, without surprises, and also consensus, wherever this can exist, and this is not always easy.”
Koutsoumbas noted that “there has to be a basis for consensus” and that there was no indication at present that this was the case, with Tsipras replying “We’ll try it and see.”
The next party leader scheduled to meet with the prime minister is main opposition New Democracy leader Kyriakos Mitsotakis at 6 pm. Meetings have been scheduled on Friday with Centrists’ Union leader Vasilis Leventis and Potami party leader Stavros Theodorakis.
The government’s aim is to pass changes in the election law some time before the next elections and a majority of at least two thirds.