Tsipras: 'We Need a New Social Contract in Europe' 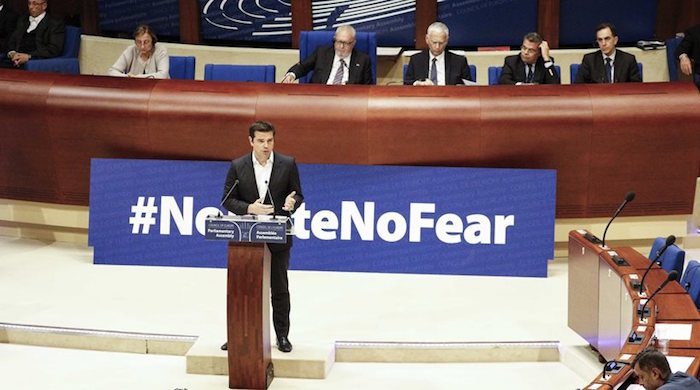 The European Union needs to return to its founding principles, Greek Prime Minister Alexis Tsipras said on Wednesday while addressing the Parliamentary Assembly of the Council of Europe (PACE) plenum in Strasbourg, following a series of meetings with Council of Europe and PACE officials.
“We need more Europe, better Europe….We need a new social contract for Europe,” Tsipras said, stressing that Europe was in a deep crisis and unable to convince its peoples to support it. Citing labor issues in Greece as an example, Tsipras noted that the country needed a reorganization of laws in a labor market that was already flexible, not to demolish it entirely.
The British referendum on whether to remain in the EU was an indication of this deep crisis, Tsipras added, noting that it had already done great damage, regardless of its outcome, in that it had set a negative precedent in Europe.
According to the Greek prime minister, it was now proven that the neoliberal model for handling the crisis, centered on a formula of general austerity, had failed.
“The 22 million unemployed in Europe are proof that the crisis is not behind us,” he said, noting that long-term unemployment was now the main political problem in Europe.
The prime minister also referred to the refugee and migration crisis, saying that Greece had found itself at its center with roughly 60,000 people now trapped within its borders.
“Greece is implementing European and international law, respecting the rights of asylum seekers,” he emphasized, noting the need to uphold and respect the obligations arising from the European Convention on Human Rights.
“It is my fundamental conviction that in order to deal with the refugee crisis we need a European response: a better attitude by all the countries and upholding the relocation process,” Tsipras said. “Our common goal, from this point of view, is to respond effectively to the refugee-migration crisis while at the same time respecting our obligations under the ECHR,” he added.
The Greek prime minister also emphasized the need for solidarity as a “shared value, a shared principle,” noting that this had allowed Greeks to manage such an unprecedented crisis.
Referring to the Council of Europe, Tsipras said that Greece considered the CoE a unifying force based on shared values and principles with an irreplaceable role, pledging that Athens will continue to contribute to the best of its ability to achieving its goals.
(source: ana-mpa)