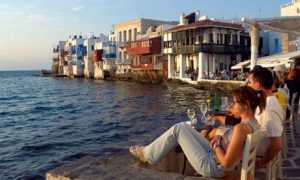 According to a report on the Greek television station, Mega, over the last four-month period between January and April there has been a major VAT revenue shortfall on the Greek islands.
The recent VAT hike from the already staggering 23 percent to a new high of 24 percent, seems to have served as a greater incentive for businesses on the islands to evade taxes.
The numbers that came in over recent months demonstrates that on islands such as Mykonos, which appears to be the champion island of tax evasion, the VAT revenue is 62% lower than expected.
Mega reports that the situation is the same for many other popular tourist destinations such as Santorini, Paros, Rhodes, Kos and Zakynthos, where the revenues from VAT had a shortfall from 35% to 40%.
Overall, during the four-month period, the regular budget appears to be 488 million euros bellow the target projected. VAT revenue in specific is around 127 million euros under target.
The same report said that in May the net revenue appears to be about 473 million euros above target, although it is unsure which revenue stream the surplus has come from.
This all comes about as part of the agreement between Greece and its creditors, which states that the monthly revenue by the end of the year must be 4 billion euros.
It is feared that if the budget targets are not met the Greek government will have no choice but to implement the automatic fiscal adjustment mechanism, something that will be discussed as soon as October, in order to hopefully create a plan of action that would let Greece avoid such measures.