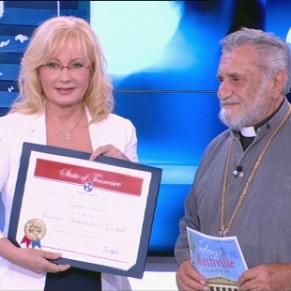 Investigative journalist Angeliki Nikolouli was appointed an Ambassador of Goodwill by the State of Tennessee for her valuable contribution to society, her work in combative journalism and service over the years.
The seal of honor was awarded to her by Bill Haslan, the Governor of Tennessee. The presentation took place on the plateau of her show for missing persons, “Light in the Tunnel.”
Father Theodore Kyritsis, a priest of the Greek Orthodox Metropolis of Atlanta, presented her with the golden seal that bore the signature of the governor.
Moved by the honor, Nikolouli thanked the Greek Community of Tennessee for her distinction. She said that she would travel to the United States at the first opportunity and personally thank the Governor of Tennessee for the honor he has bestowed on her as well as meet with Greek Americans who have supported her show.