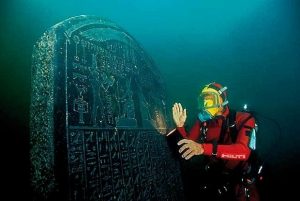 The British Museum will be displaying over 200 artifacts excavated off the coast of Egypt near Alexandria from 1996 to 2012. The exhibit titled Sunken cities: Egypt’s lost worlds will be on display from May 19 through November 27.

The two lost cities of Thonis-Heracleion and Canopus have recently been discovered after having been submerged at the mouth of the River Nile since the 8th century AD when the sea overtook the cities. Since then, their location and condition was unclear.

Sunken cities: Egypt’s lost worlds is the museum’s first large-scale exhibition showcasing underwater discoveries and because of the city and its artifacts being submerged underwater, the vast majority of objects are well-preserved.

Many important relics have been discovered and have provided new insight in helping historians and archaeologists understand the cross-cultural exchange and religious influences between the ancient Greek and Egyptian civilizations.

A variety of objects from statues, metal ware and gold jewelry at the exhibit shows how Greece and Egypt interacted in the late first millennium BC and how the Greek kings and queens who ruled over Egypt for 300 years incorporated many Egyptian beliefs and rituals to legitimize their reign and enrich their culture.