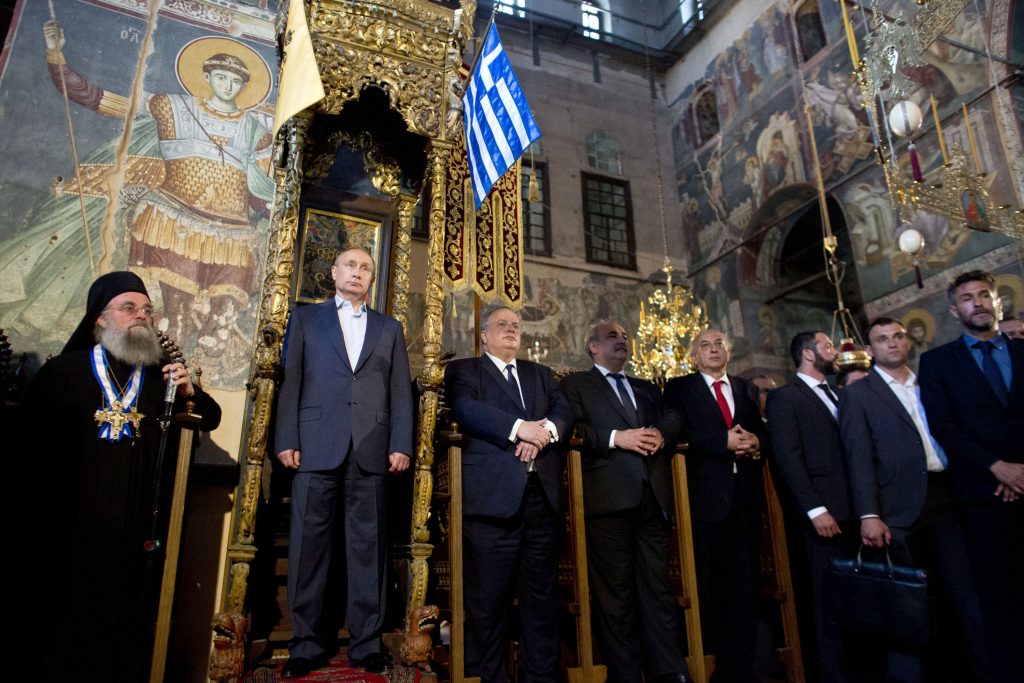 Russian President Vladimir Putin’s visit to Greece was all about business and religion. His meetings with Greek officials cast the spotlight on the traditions that bind Greece and Russia, most of all Orthodoxy. Putin, a man who has often talked about his strong Orthodox faith, wrapped up his two-day trip to Greece by visiting the monastic community of Athos to join celebrations for the 1,000th anniversary of the Russian presence at the Holy Mountain, located at the third leg of the Chalkidiki peninsula. 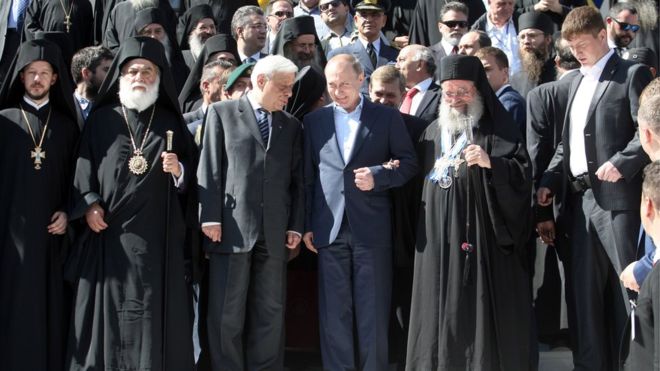 Accompanied by Russian Orthodox Patriarch Kirill, Putin arrived at the Russian monastery of Saint Panteleimon – one of the 20 monasteries in the region –  at noon on Saturday under tight security.


Greeted by a delegation of the monastic community and representatives of the Greek government, Putin began his one day pilgrimage at Karyes, the administrative capital of Mount Athos, he attended mass before meeting with Greek President Prokopis Pavlopoulos. Putin’s last visit to Mount Athos was in 2005. On this visit, he thanked Ecumenical Patriarch Bartholomew I and the Church of Greece for their support in relations between Greece and Russia as well as for facilitating his visit to the Holy Mountain.

Pavlopoulos stressed that the values promoted at Mount Athos were those of solidarity and the pursuit of peace that are necessary in times of crisis.
Culture
Putin and Tsipras visited the Byzantine and Christian Museum after concluding their meeting and joint press conference. Standing in front of the masterpiece “Ascension” by Russian icon painter Andrei Rublev, Tsipras said that the two leaders hope to reaffirm ties and expand relations. “The main aim is to highlight common spiritual roots and cultural heritage,” he said. The icon, on loan from Russia, rarely leaves the country. While Tsipras pointed to the Russian characteristics of the icon, Putin said that Rublev drew his inspiration from the Byzantium.
Deals
Putin signed a number of economic deals with Greek Prime Minister Alexis Tsipras on Friday in order to reinforce the relationship with one of his country’s few EU friends. The visit comes at a tense time between Russia and Europe following the conflict in Ukraine in March 2014.  Sanctions are still in force against Moscow with EU leaders set to discuss whether these should be renewed in the banking, defense and energy sectors that expire in July. Greek officials believe that increased trade in Russia could play a part in recovery efforts from the recession that Athens seeks to emerge from.
Tsipras said on Friday that sanctions against Russia after Moscow annexed Crimea from Ukraine, March 24 are not productive. “We have repeatedly said that the vicious cycle of militarization, of Cold War rhetoric and sanctions is not productive,” said Tsipras, “the solution is dialogue.”
Deals signed included a Greek-Russian political declaration for dialogue on issues of mutual interest. There were agreements signed in many sectors including energy, transport, shipbuilding, science, technology, tourism, pharmaceuticals and meteorology. Cooperation agreements were signed between Hellenic Petroleum and Rosneft, the Center for Renewable Energy Sources and the Russian Institute of Energy, Enterprise Greece and Invest in Russia as well as the University of Piraeus with the University of the Urals.
“Energy constitutes a key area of economic development for Greece and the region and our strategic aim is for Greece to become an energy hub,” said Tsipras, noting that this cooperation is a strategic choice for Greece not just because of historical ties but also because it constitutes an integral part of an active foreign policy for Greece.
He said the country has stable alliances with the West “but doesn’t hesitate to extend its branches north, towards the Balkans, the wider Black Sea neighborhood, the south, in North Africa, the Middle and Far East.”
Putin said part of the focus of the Greek-Russia Year is to promote trade. He said bilateral trade last year totaled 2.7 billion euros. Both countries wish to emphasize investments with Russia having already invested 700 million euros in Greece and room for more investments in transport.
Putin also said the 10th joint ministerial committee will meet in September to discuss difficulties in cooperation and added that there is still many possibilities for cooperation in energy and the agreement signed will contribute to its further development.
Backstage drama
Such a high-level visit could not be without drama:
* Putin desired to stay at the luxury Grand Bretagne hotel in Syntagma Square, Athens, just across the road from the Greek Parliament. Unfortunately, the booking was made at the last moment and no rooms were available. The Russian delegation had also tried booking a room by the sea at Asteras Vouliagmeni, however they also had no luck there, as the hotel was fully booked due to a conference taking place. He finally ended up at another hotel by the sea.
* There was a backstage battle over who would have the honored seat of thrones from which to watch the liturgy at Mount Athos: Putin or Pavlopoulos? The decision would have  appeared like a no-brainer to most, however in this case the Greek leader decided to accept defeat by not showing up to mass. A “victim” of the conflict was the Foreign Minister Religious Secretary Stathis Liadas who is now a persona non grata at Mount Athos.